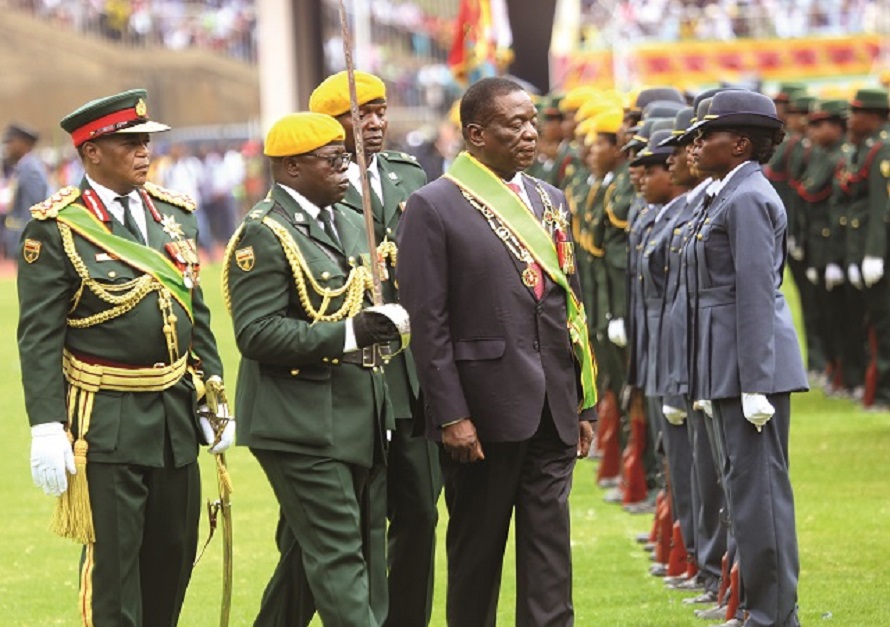 President Emmerson Mnangagwa inspects the Guard of Honour at his inauguration as Head of State and Government and Commander-in-Chief of the Zimbabwe Defence Forces at the National Sports Stadium in Harare on Friday. With him is the Commander of the ZDF, General Constantino Chiwenga

Chombo’s and Chipanga’s bail hearings are scheduled for tomorrow, while Hamandishe will be back in court on 8 December, 2017. Chombo (66) is facing fraud, abuse of public office and corruption charges; while Chipanga, Zanu-PF’s former Secretary for Youth Affairs, is answering to one count of publishing falsehoods.ww

Hamandishe (38) faces six counts of kidnapping and a charge of publishing a false statement. The trio was taken to remand prison in leg irons at around 6.45pm. The court heard that Chombo violated Section 4(a) of the Prevention of Corruption Act (Chapter 9:16) when he allegedly connived with Psychology Chiwanga, R Pazvakavambwa, Iben Fransisco, James Chiyangwa, Theresa Chenjerayi, Elias Choto and L Chimimba to forge documents to transfer a Glen Lorne, Harare property from the Harare City Council to one Alois Chimeri.

He allegedly committed the offence during his stint as Local Government, Public Works and National Housing Minister.

Part of the charge sheet reads, “During the period extending from June 25, 2004 and December 2009, the accused and his accomplices forged documents that include a lease-to-buy agreement and capital gains tax clearance certificate, and purported that these documents were authentic and made by the City of Harare with the concurrence of Local Government and Zimbabwe Revenue Authority officials.” This resulted in council losing property valued at US$900 000.

Chombo is also accused of using his influence as Local Government Minister to arm twist the Harare City Council to allocate him residential stand Number 61 Helensvale, Harare which measures 193 716 square metres. It is alleged he developed cluster houses on the land.

Initially, the City of Harare had asked Chombo to use the land for recreational purposes, but he allegedly took the land for himself through Harvest-Net Enterprises, a company he co-directed then. The property was valued at Z$23 246 800 000, the equivalent of US$2,7 million.

The court also heard that on 1 October, 2005, Chombo allegedly fraudulently acquired a Z$14 billion loan from the Reserve Bank of Zimbabwe under the Other Crops and Livestock Support Facility. Instead of purchasing farming implements, he allegedly bought two Toyota Hilux Vigo vehicles.

Chombo’s lawyer, Professor Lovemore Madhuku, applied for the ex-Cabinet minister’s removal from remand because he had been “over-detained” after having been “arrested” by people dressed in military attire. Prof Madhuku turned to Section 50 of the Constitution which states that any person detained or arrested by a State agent should be taken to court within 48 hours.

However, presiding magistrate Mr Elisha Singano dismissed the application, saying the defence had failed to prove that those who had “arrested” Chombo were State agents. Chipanga appeared before Harare magistrate Ms Josephine Sande, charged with publishing or communicating false statements prejudicial to the State, or alternatively causing disaffection among the police force or defence forces. The charge arises from a media statement Chipanga read on 14 November, 2017 in which he denigrated the Zimbabwe Defence Forces.

Chipanga had earlier told the court he suspected that he was detained by the police since he was “arrested” at Borrowdale Police Station where he had gone to seek refuge following warnings that he was targeted by unknown assailants. Ms Sande dismissed the application saying Chipanga and his defence had failed to prove that those who had “arrested” him on 15 November, 2017 were State agents.

Hamandishe appeared before magistrate Hosea Mujaya to answer to six counts of kidnapping and one of publishing a false statement.

The former Zanu-PF Youth League national political commissar is accused of abducting and detaining six political activists in Chitungwiza on 23 December, 2015. Hamandishe’s charge of publishing a false statement stems from a media statement delivered by Chipanga denigrating the ZDF.