THE PETITION OF THE UNDERSIGNED 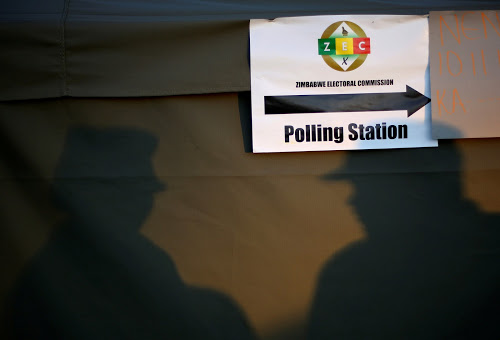 Shadows of police officers are cast on a tent of a polling station during the Zimbabwean general elections in Harare, Zimbabwe, July 30, 2018. REUTERS/Siphiwe Sibeko

TO THE HONOURABLE SPEAKER AND MEMBERS OF PARLIAMENT, IN PARLIAMENT ASSEMBLED

THE PETITION OF THE UNDERSIGNED

Loreen Mupasiri Sani, Combined Harare Residents Association [CHRA] of No. 62 Mandela, 10th Floor Michael House, Harare. Contact number; 0773 042 981
Your petitioners, having consulted and are supported in this petition by fellow citizens who have appended their signatures hereto attached

Respectfully shows that your Petitioners

Being citizens of Zimbabwe
Whose funding method are subscriptions from members and donor funding from various development partners and organisations.
COGNISANT that the Constitution of Zimbabwe (Amendment No. 20), 2013 (Constitution), under Section 149 (Right to petition Parliament), endows citizens and permanent residents with the right to petition Parliament to consider any matter within its authority, including the enactment, amendment or repeal of legislation.

MINDFUL that the Constitution

under Section 67 (Political rights) gives every Zimbabwean citizen the fundamental right to free, fair and regular elections for any elective public office. (The right, like most other fundamental rights in the Declaration of Right, can be limited under section 86 (Limitation of rights and freedoms) of the Constitution so long as the limitation is “fair, reasonable, necessary and justifiable in a democratic society based on openness, justice human dignity, equality and freedom”.)
under Section 158(3) (Timing of elections) states that polling in by-elections to Parliament and local authorities must take place within 90 days after the vacancies occurred unless the vacancies occur within nine months before a general election. (The section makes no provision for the postponement of by-elections beyond the 90-day limit and there is no other provision in the Constitution that confers the power to postpone elections or by-elections).
NOTING that free, fair and regular elections are one of the principles of good governance, which is a founding value if Zimbabwe enshrined in Section 3 of the Constitution and is binding on “the State and all institutions and agencies of government at every level”.

REMEMBERING that S.I. 225A/2020 – Public Health (COVID-19 Prevention, Containment and Treatment) (Amendment) Regulations, 2020 (No. 4) – indefinitely suspended by-elections citing the COVID-19 pandemic “for the duration of the period of the declaration of COVID-19 as a formidable epidemic disease” remains in place with no indication on the intention to review it.

NOTING that the pandemic has since visibly slowed down resulting in the government allowing political, religious, social and other gatherings to resume across the country.

AWARE while at one point suspending by-elections may have been necessary as a measure to contain the COVID-19 pandemic, the necessity of such a measure (as a ground on which people or institutions may be excused from not complying with the law) has fallen away. It is trite that necessity is carefully circumscribed as a reason for not complying with the law requires that one shows

A real and immediate danger and the danger was not one that the law says must be endured, and
That the step taken [in this case suspending elections] was the only reasonable way of avoiding the dander, and
That the interest infringed [in this case, the right to participate in elections] was not greater than the interest protected [public health]
FURTHER AWARE that other jurisdictions in Africa – including those neighbouring Zimbabwe such as Zambia, Tanzania, Malawi and South Africa – and beyond have successfully held elections, indicating that by-elections can be held under strict COVID-19 protocols.

DISTURBED at the recent show of confusion and discord over why by-elections for 28 parliamentary and 105 local authority vacancies remain outstanding. Despite, the Zimbabwe Electoral Commission chairperson, Justice Priscilla Chigumba – quoted in in the 27 October 2021 issue of The NewsDay stating that the electoral management body is ready to conduct the long outstanding polls, the chairperson passed the buck to the Ministry of Health, claiming that S.I. 225A/2020 was the only hinderance. However, the Deputy Minister of Health has since rebuffed ZEC’s assertion stating that the Ministry was not responsible for stopping the by-elections as it does not have the role of supervising elections.

CONCERNED that the discord over who authorises or suspends the holding of by-elections affects the credibility of elections and is contrary to promoting democracy and relevant human rights, and is non-compliant with international instruments that govern the conduct of democratic elections to which Zimbabwe is a signatory and a party.

TROUBLED that the continued suspension of by-elections

now infringes a greater interest than it is intended to uphold: the right to participate in regular elections, a right which is at the core of democracy and a fundamental value of our Constitution.
deprives citizens of adequate representation, creates a leadership vacuum and paralyses the oversight and representative functions of elected leadership.
makes a statutory Instrument enacted under the Public Health Act trump a mandatory provision of the Constitution which requires by-elections to be held within a 90-day period.
ANXIOUS at the speculation that the state may be weaponizing the pandemic and using it as a scapegoat in denying citizens the exercise of their democratic rights casting doubt on the sincerity of the continued suspension of by-elections on account of the protection of public health.

The Petitioner beseeches the Parliament of Zimbabwe to protect the Constitution and democratic governance in Zimbabwe, ensure that the provisions of the supreme law are upheld and that the State and all institutions and agencies of government at every level act constitutionally and in the national interest and account to Parliament by exercising its constitutional mandate to

Reconsider S.I. 225A/2020 in light of the fact that COVID-19 has visibly slowed down.
Require ZEC and the Ministry of Health to appear before Parliament to clear the discord and dispel the speculation around the holding of by-elections.
Require ZEC to appear before Parliament to publish plans and measures to hold by-elections while enforcing the observance of strict COVID-19 guidelines.

Wherefore your petitioners pray that your Honourable House will be pleased to take their case into favourable consideration and grant such relief as it may deem fit.

AND your petitioners, as in duty bound, will ever pray.

For and on behalf of CHRA