Churches foster dialogue in Zimbabwe, but President is absent 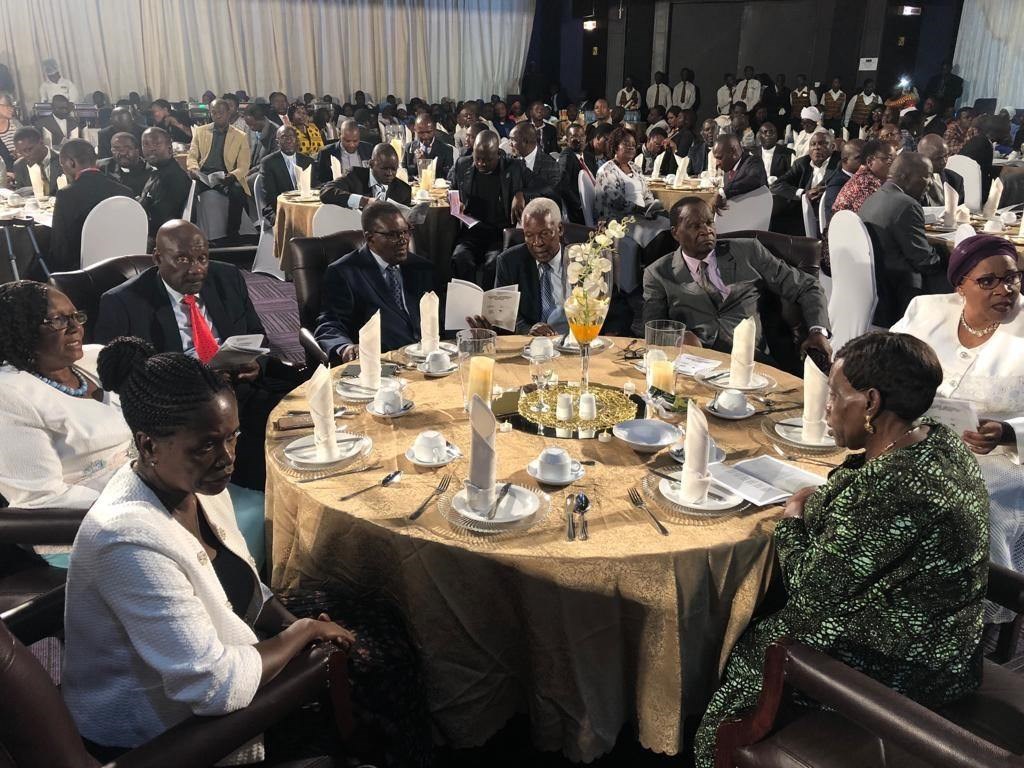 Delegates at the National Dialogue prayer breakfast on Thursday

THE Church is the only source of hope for peace in Zimbabwe, the general secretary of the Zimbabwe Council of Churches (ZCC), the Revd Dr Kenneth Mtata, said on Thursday.

Dr Mtata was speaking after a prayer breakfast to launch a National Dialogue, called by the Churches, and attended by government ministers, members of the opposition parties, and delegates from industry, the security sector, civil society, human-rights groups, trade unions, as well as international observers, including some ambassadors.

“There was an appetite across all sectors for dialogue,” Dr Kenneth Mtata said. “I was overwhelmed: we got more than we expected. We can move forward with so much confidence.”

The President of Zimbabwe, Emmerson Mnangagwa, had been expected, but pulled out at the last minute. He was represented instead by the chair of the Zanu-PF Party, Oppah Muchinguri-Kashiri, who read out a speech by the president saying that he was ready for dialogue. Dr Mtata said the president would be briefed personally later in February.

The leader of the opposition, Nelson Chamisa of the MDC party, was present. He posted on Twitter the day before: “DIALOGUE NOT GAMES. We’ve a political crisis arising out of a disputed and rigged Presidential election result in Zimbabwe.The Presidency is disputed. We need genuine dialogue under a credible Convener and mediator to solve this crisis. Stop citizens abuses, beatings and arrests.”

The launch of the National Dialogue comes after the worst post-Mugabe violence, triggered by increased fuel prices and calls for a national shutdown. Seventeen people are known to have died, and the director of Human Rights Watch in South Africa, Dewa Mavingha, reported a further 78 who had been treated for gunshot wounds, 16 cases of rape by soldiers, and more than 600 arbitrary arrests.

“The figures could be higher, given that the crackdown is continuing and people are very, very afraid to come forward and report,” Mr Mavingha said.

The National Dialogue is the Church’s answer to the crisis. It was hosted by the ZCC, the Zimbabwe Catholic Bishops’ Conference, the Evangelical Fellowship of Zimbabwe, and the Union for the Development of Apostolic Churches in Zimbabwe Africa.

“As the nation finds itself at the cross-roads,” Dr Mtata said, “the Churches had made their voices louder regarding the urgency and necessity of a national dialogue.”

“At the moment in Zimbabwe, the Church is the only source of hope of finding a peaceful solution.”

He told the prayer breakfast: “I want to say to Zimbabweans: ‘We can overcome fear, and God can move us to the next step of forgiveness.’ There is something miraculous that happens when fear is overcome, when forgiveness is achieved — a new type of fellowship emerges.

“This is the miracle of reconciliation: once people are reconciled they get surprised how people can co-exist.”