Civil servants to get salary hike 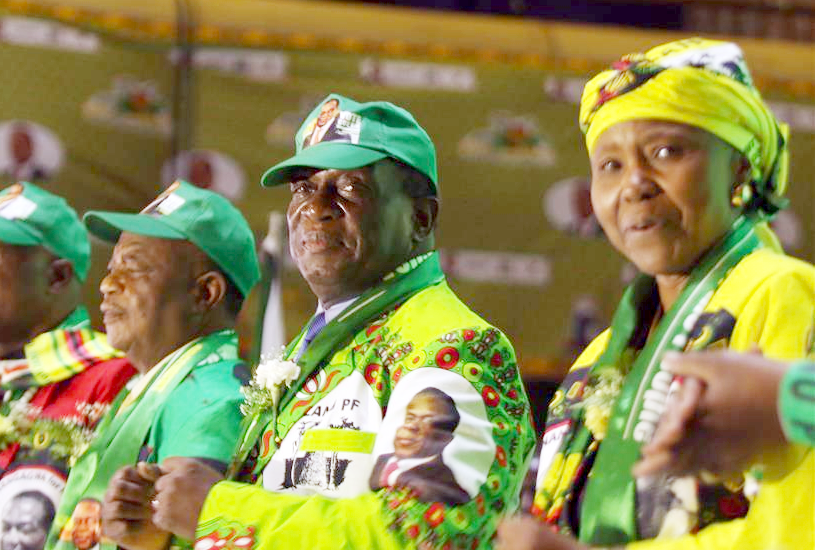 Source: Civil servants to get salary hike – Sunday News May 6, 2018

Gabriel Masvora, News Editor
CIVIL servants will have their salaries and working conditions improved,while their salaries and bonuses will be paid in full and consistently, among a cocktail of measures to be put in place to ensure the country’s labour force is at the core of shaping the growth of Zimbabwe towards attaining a middle class economy by 2030.

The progressive move in raising the morale of the workers is contained in the Zanu-PF manifesto (CLICK HERE TO ACCESS IT) that was launched in Harare on Friday by the party’s First Secretary who is also the Head of State and Government, President Emmerson Mnangagwa.

The ruling Zanu-PF is tipped to win resoundingly in the forthcoming harmonised polls and it will ensure that workers’ rights are protected, their conditions of service improved and decent jobs created through formalisation of the informal sector.

Our Harare Bureau reports that Government has come up with a package to improve teachers’ salaries and working conditions, and the majority of unions representing teaching staff have pledged not to disrupt the start of the second school term of 2018.

Schools open on Tuesday, and some opposition-aligned unions have been inciting their members to go on strike. Our Harare Bureau has established that Government is “highly likely to effect a percentage increase” in salaries and reintroduce an adjusted vacation leave facility, while also incorporating teachers into a State housing scheme.

Last week, Government and teachers’ unions engaged the Zimbabwe National Elders Forum to mediate a resolution ahead of schools’ opening. The parties meet again tomorrow. Primary and Secondary Education Minister Professor Paul Mavima said, “I am not taking a proactive role in the issue, you have to talk to Minister (of State for Presidential Affairs and Monitoring Implementation of Government Programmes Simbarashe) Mumbengegwi for further clarity. However, I can say we met with the Elders and paved a way forward with the issue. We are happy with the progress made so far in addressing the concerns to avert the intended strike. Teachers wanted a 100 percent salary increment. However, considering the budget, it is already strained, we cannot afford to address all the demands to be paid in cash. Thus we have suggested to accommodate their demands in both cash and kind terms. We will also look at specific allowances and make adjustments on vacation leave issue. In addition, interested teachers will be offered accommodation under the Command programme; and in terms of allowances, Government will make appropriate offers to meet their demands.”

The Apex Council, the umbrella body for civil servants’ representatives, said its members would report for duty on Tuesday.

Apex Council president Mrs Cecilia Alexander said: “We are informing all civil servants that negotiations with Government are still underway and we will be meeting Government on Monday 7 May 2018. We are anticipating to get positive response from the concerns which have not been addressed for a long time. This is feedback to civil servants in general that negotiations are still underway and that they should expect some feedback on Monday. The Apex Council has not called for a strike.”

The party also promised that major projects that are already underway would create thousands of jobs.

“Once capacitated NRZ has the potential to reclaim at least 15 000 jobs from the 4 000 current employees. The dualisation of the Beitbridge-Harare Road will also create over 5 000 jobs and opportunities downstream the value chain. More people will be employed in ethanol production, including households who are on out-grower schemes,” reads the manifesto.

Zanu-PF wants to see more jobs created through resuscitation of closed mines and industries such as Ziscosteel, value addition such as the Diamond Polishing Company, retooling and new mining ventures and formalisation of the artisanal miners.

On housing, Zanu-PF said it will put an end to irregular allocations of land and development of shanty towns by the MDC-T local authorities. It would also eliminate all forms of land baronage — ensure that all land barons and errant council officials who fleeced unsuspecting home-seekers are brought to account.

“The urban housing backlog will be dramatically reduced by among other interventions, urgently regularising the tenure of urban dwellers that were allocated housing and commercial stands on peri-urban farms.”

The ruling party said it will also ensure that health provision is brought to standard and ensure all Zimbabweans have access to quality and affordable health care. This will be done among other measures, the establishment of at least one hospital per every administrative district, translating to 78 new hospitals by 2023, free medical treatment for cancer patients and a reduction of hospital fees by 50 percent.

On education, Zanu-PF promised that it will construct schools in all new resettlement areas acquired under the national land reform programme and ensure there is a school within every two kilometre radius. More universities will be constructed while all polytechnics and vocational training centres will be upgraded to university status. The party said its commitment to improve the lives of the people has already been evidenced by inroads the country has made since the rejuvenated party came into power in November last year.

“The new dispensation brings hope to the people as the environment is poised to become more favourable given the immense re-engagement efforts to have sanctions removed and opening Zimbabwe for business. The move from Pariah State to a global partner is a key success factor. Now that Zanu-PF has delivered impressively in 100 days, then exceedingly abundant will be achieved in the next five years. This is the basis of our promises in this election that will convince the people to vote for Zanu-PF,” reads the manifesto.

The party added that the Government under President Mnangagwa has demonstrated its commitment to the holding of free, credible and non-violent polls in the following manner — BVR now complete, invitation of regional, continental and International community to observe elections, commitment to non-violence, engagement of other political parties to incorporate their views and concerns in preparation for the elections.

The party said it has also led a massive clampdown on corruption and when retained into power will continue to ensure that Zimbabwe becomes a corrupt free State. In his executive summary of the manifesto, President Mnangagwa also implored that voting the party will ensure that the country’s legacy is sustained.

“It is therefore, a national duty of every one of us — none but ourselves, the youth, women, the disabled and disadvantaged, the vulnerable from across the political, ethnic and racial divide to go out in our epoch-making numbers to vote for Zanu-PF in the forthcoming elections to ensure that our legacy is sustained for posterity,” he said.