‘Civilian supremacy must rule over military in polls’ 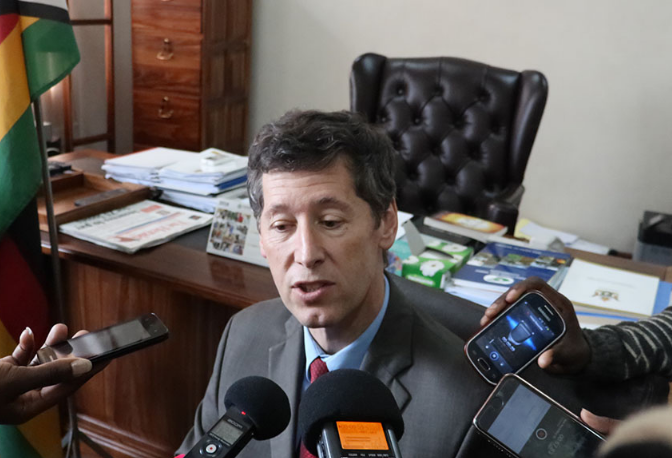 Source: ‘Civilian supremacy must rule over military in polls’ – The Zimbabwe Independent March 16, 2018

CANADIAN ambassador to Zimbabwe Rene Cremonese (RC) was in Bulawayo last week. Zimbabwe Independent reporter Nqobani Ndlovu (NN) spoke to him on several issues, including the need for free and fair elections and the importance of the military staying out of civilian affairs. Find excerpts of the interview below:

NN: What is the current nature of diplomatic relations between Zimbabwe and Canada, and does Canada recognise the government following the stepping down of former President Mugabe in the aftermath of a military intervention?

RC: Relations between Canada and Zimbabwe are good. There has been a call made for re-engagement and we welcome the opportunity to discuss the manner by which this could occur. In that regard there are many issues which ought to be discussed. Perhaps the most important matter going forward will be the holding of free and fair elections this year.

NN: Zimbabwe goes for elections in a few months, and President Emmerson Mnangagwa has promised free, fair and credible elections. What is your comment on his statements, considering past electoral disputes over allegations of vote fraud and electoral irregularities, among other issues raised in previous elections in the country?

RC: For Canada, it’s positive that the President and members of the government have indicated their intention to have free, fair and transparent elections. I think it’s important for everyone — Zimbabweans and the international community to continue to emphasise to the government that it needs to take steps to make sure that those elections are free, fair and transparent.

I think that there are specific principles that exist that Zimbabwe has accepted in its own constitution and also in the Southern African Development Community (Sadc) principles that are important, which government can measure up to on what it needs to do in order to make sure that there are free, fair and transparent elections.

NN: Do you have any concerns on the current political environment in Zimbabwe with regards to the holding of free, fair and credible elections?

RC: The embassy has seen reports from a number of civil society organisations and some from the media. We see government institutions like the Zimbabwe Electoral Commission (Zec) and the police all acknowledging that contrary to policy and law requiring that no one has a right to demand voter registration slips from any registrant, this is happening on the ground, with the assumption that those are being used to intimidate and undermine the secrecy of the ballot. The Sadc principles, the government’s own laws and constitution show clearly that those are not ways to reach free, fair and transparent elections, and those will be areas of concern for Canada.

NN: What does it mean to you as an embassy when such things are happening?

RC: What it means to us is that we engage in dialogue with government and other members of Zimbabwean society to have a conversation on these issues and to reinforce our sense that if Zimbabwe is promising free, fair and transparent elections, there are certain norms that have to be respected. Those are just basic elements for the government itself. There are also basic elements of Sadc election guidelines and principles such as openness for all parties to the media. Those are elements that form part of a definition of free and fair elections, and government must take steps to respect its constitution and Sadc election principle obligations.

RC: The government’s agreement that it will allow international observers to the country is positive. We need as well to make sure that we all agree what election observation means. It doesn’t mean that we come two days before elections and deploy observers at all the polling stations and see how the voting and counting is done. The principles of free, fair and transparent elections begin well in advance of the actual election day, and the campaign itself.

So observers ideally should be here much earlier and those are things we can continue to have dialogue on with the government to see how we can try to determine how and when those observers can be deployed. I don’t have specific plans at the moment for a Canadian election observation team to come here, but certainly it’s something we can look at.

NN: You have been in Zimbabwe for some months, and I am sure you have read reports of people protesting on the issue of Gukurahundi, demanding that government finds closure to the issue, that President Mnangagwa must apologise and so forth. How best would you advise government to deal with this issue?

RC: I think when you look at issues like this, there are many examples around the world where questions of gross violations of human rights, and in the sense of healing, reconciliation and truth telling, there are many difference mechanisms that have been used and each country has found a different way to do that. Canada has had its own truth and reconciliation commission processes. They have been important.

They have been difficult. They have created tensions within communities and we have tried a way to resolve that legacy in order to move forward. I think it’s important that the government has passed legislation to put in place a National Peace and Reconciliation Commission (NPRC). It’s important work for it to do its work which it has to do in consultation with the people who see themselves as the victims of the events.

I know there is a debate as to when do you start, and when do you finish, does it focus only on the events of the 1980s, or does it go further and way back? Those are the things that I think the government, through the NPRC and the victims, should deal with to find a way to move forward. When I look at the Canadian experience, I know that moving ahead, moving forward, truth-telling and healing is an important step before you can put behind the weight, the pain that people carry with them.

NN: And coming back to the issue of elections, does the military have any role to play before and after the elections, considering there have been reports of the military meddling in civilian political affairs, the November coup being a case in point?

RC: I have been here in Bulawayo for a couple of days now, and this question has come up from members of the civil society organisations on a regular basis in general on the role of the military in society. I think what’s critically important for all countries is that we maintain a focus on civilian supremacy over the military. That’s one thing that needs to happen.

I haven’t heard the government speak to that as strongly and openly as they have on other issues. I think that is something that is critical going forward and that needs to be related to the upcoming election in the sense that the results of the election should be respected by everyone. We need to have free, fair and transparent elections and the concept of civilian supremacy that the results will be respected by everybody, including the military is key. I think that’s very important.

The government has made quite a number of statements on the importance of the economic situation in Zimbabwe. People clearly need a revived economy here; people have suffered; people are struggling; people have been amazingly resilient to find ways to survive. Canadian companies will certainly be looking for specific changes on economic policies in order to return to invest and do business here but you cannot place your eggs in one basket as you also have to deal with human rights and political changes, and this issue of civilian supremacy over the military. Those are the issues that go hand-in-hand because even if you want to restore the economics of the country, you really cannot do that in a sustainable way unless you also deal with human rights issues and civilian supremacy over the military.

NN: Do we have Canadian companies that are expressing interest to come back and do business in Zimbabwe, considering that the President has said the country is open for business?

RC: I don’t have numbers I can give you in terms of Canadian companies that were here and left. I think it’s simply easy to say the economic situation and the reputation of Zimbabwe as an economic destination for investment and business from a Canadian perspective deteriorated over time. There is no way to deny that. Since November, we at the embassy have seen an increase in the number of Canadian companies who are looking for advice on whether or not they can come back. So I would say there is renewed interest in Zimbabwe as an economic destination but, as I said, the full package of economic and political reforms that we have been talking about is important to Canadian companies as well.