Source: CIZC stands in solidarity with civil servants – The Zimbabwean

Crisis in Zimbabwe Coalition (CiZC) stands in solidarity with civil servants who have embarked on job action following government’s continued failure to improve their welfare and working conditions. 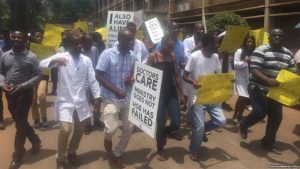 The demands by the civil servants who include teachers, doctors, nurses and other health personnel are legitimate and we implore the government to desist from commandist approaches in addressing strikes by civil servants.

The military approach by Vice President Constantine Chiwenga, who had been assigned to negotiate with striking doctors is regrettable and has no place in a democratic society.

We reiterate our call that job actions within the public service serve to prove the Government of Zimbabwe’s failure to address Zimbabwe’s economic meltdown which has been characterised by foreign currency shortages, fuel shortages, cash shortages and spiralling prices of basic commodities at a time the majority of Zimbabweans are living far below the Poverty Datum Line.

We take with great exception sentiments from senior government officials that demonstrations from impoverished civil servants and ordinary Zimbabweans are meant to effect change in government.

The government needs to face the reality regarding the economic demise in the country which stems from a constitutional and political crisis following the November 2017 military coup and the much discredited July 2018 elections.

In addressing the strike by civil servants, the government ought to embrace an all stakeholders approach and negotiate in good faith.

The government needs to prioritise the welfare of its workers and the general citizenry as job actions within the public service are impacting negatively on ordinary citizens.