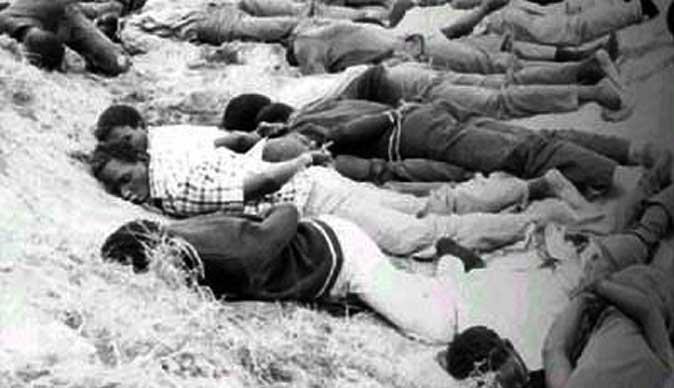 The killings only ended when Zapu leader Joshua Nkomo agreed to join the
ruling party in 1987 through what became known as the Unity Accord,
masterminded by his rival then Robert Mugabe, who was the country’s Prime
Minister.

Many of the dead were buried in shallow graves, mass graves and disused
mines. Others disappeared, according to the 1997 report and witness
accounts. A tragedy of that magnitude cannot be wished away nor swept
under the carpet.

Mugabe – the man who unleashed the army into the affected regions under
the guise of crushing dissidents – flatly refused to apologise for the
deaths during his 37-year-long reign, describing the massacres as a
“moment of madness”.
He also dispatched a probe team to investigate events of that period but
the report was never made public.

Following his overthrow by the military in November 2017, the new
government of President Emmerson Mnangagwa has tasked the National Peace
and Reconciliation Commission to revisit the issue after it became one of
the major talking points in the run up to the July 30 elections.

Mnangagwa’s government has promised to exhume and rebury those who died
during Gukurahundi to bring closure to the killings.

His government said it will also assist people whose parents died in the
campaign to get proper identity documents, as well as medical help for
those injured. But like Mugabe, Mnangagwa has refused to apologise for his
alleged role though he said people should be free to talk about the
killings.

Somehow, we have this feeling that Mnangagwa could be trying to buy time
in the hope of deferring resolution of this emotive issue to the next
generation.
We hope this is not the case, because justice delayed is justice denied.

Here, Mnangagwa and his administration have an opportunity to conclusively
deal with this long-standing matter so that those affected can turn a new
page and move on with their lives.

As unpalatable as truth can be, especially for those implicated in the
massacres, Zimbabweans need to know the truth before they can talk about
reconciliation.