Come, be my light

Mother Teresa of Calcutta is a name many have heard but may know only the barest details about. Born in Albania in 1910 she died in 1997 little more than twenty years ago.

Source: Come, be my light – The Zimbabwean 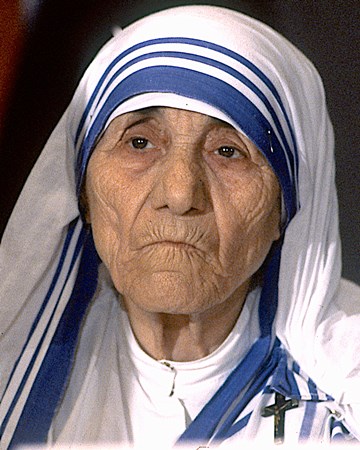 The story of her life, viewed through her letters[1], has come my way and makes for astonishing reading.

Born Gonxha Agnes Bojaxhiu, she joined the Loreto (Mary Ward) sisters, in Dublin in 1928 and soon found her way to India. For eighteen years she followed the normal course of training and became a teacher at St Mary’s School for girls in Calcutta. Then on the 10th September 1946, on a train going to Darjeeling, she had an experience which she could never put into words. It was a direct call from God – ‘a call within a call’ – to give up her life in Loreto and ‘go into the slums and serve the poorest of the poor’. She could not doubt this call but it took her months to convince the bishop and her own superiors of its genuineness. On 6 January 1948 the bishop finally felt satisfied and from that day on he gave her his full support. Still she had to wait for the final answer from Rome and it was 17th August 1948 when she finally set out alone to begin her work among the poorest in Calcutta.

The work quickly grew and young women came to join her and they started houses in different parts of India and beyond.  They lived simply, desiring to share the lives of the poor and wore an Indian saree. By 1986 they had 350 houses in 77 countries.

So much for what people could see on the ground.  Wherever Mother Teresa went she radiated a great joy and confidence in God. But only a handful of people, the letters now reveal, had any idea what she was really living.  They could see the smile and joy but within Mother Teresa was in continual agony from the time she started her work in 1948 until her death in 1997, virtually fifty years.  She had asked to have her letters destroyed but the recipients realised that they were a precious testimony to what she was really living. And it takes a big effort on our part to grasp what was happening. She had offered Jesus everything and in response he invited her to share his agony in the garden and his abandonment on the cross. At one point she wrote:

The greatest evil is the lack of love and charity, the terrible indifference towards one’s neighbour who lives at the roadside assaulted by exploitation, corruption, poverty and disease’. Jesus asked Teresa to share in the experience of the poor, who were so rejected and assaulted, by experiencing ‘rejection’ by him, although it was impossible for Jesus to reject her. Her ‘darkness’ was a way in which she completely identified with the poor.

‘His Father’ Teresa wrote later to her sisters, ‘did not claim Jesus as His beloved Son (at Gethsemane) as he did at the Baptism and at the Transfiguration. Why?  Because God cannot accept sin and Jesus had taken on sin – He had become sin … when you accept the vows you accept the same fate as Jesus’, that is, the sense of rejection by God; ‘Why have you forsaken me?’ Jesus committed no sin but he took on the consequences of sin. The poor are often innocent victims and Teresa became one of them. She did not simply do things for them.

This is not to say that there was anything false or forced in her smile and the joy she radiated.  It was just that it came from deep within and was not something she ‘felt’ on the surface. The three readings this Sunday form a sandwich! The two pieces of ‘bread’ on the outside are joyful readings from Isaiah and Luke. But the meat of the sandwich is the reading from Galatians; ‘the only thing I can boast about is the cross of our Lord Jesus.’

Newer Post
Forex ban: A typical law likely to criminalise every citizen
Older Post
How do you make choices at life’s crossroads?