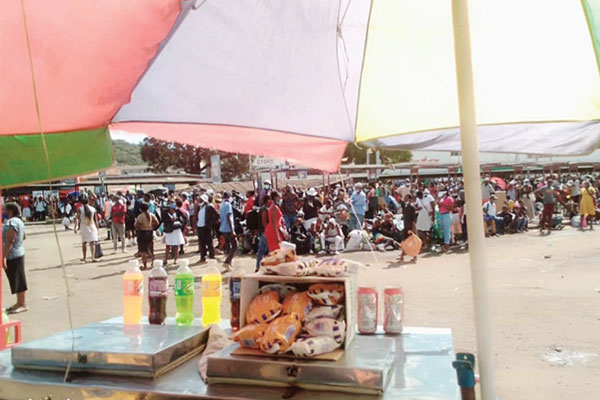 Two young men exchange blows as they both wrestle for the front spot.It’s 5:10pm and Harare’s Market Square bus terminus is teeming with commuters desperate to get home before dark, but there are no Zupco buses.

An elderly woman is shoved out of the way and staggers into a puddle of dirty water. As fate would have it, light showers begin to fall.

The long queue is disrupted as commuters scurry for cover while there is “brave” push to be in front.

Schoolchildren with satchels strapped on their backs try their luck, but the crowd is getting too rowdy and violent.

Amid the chaos, pickpocket masters suddenly get down to business and with their nifty fingers, search bags of unsuspecting commuters who are too preoccupied to notice.

It does not take long before one or two fall victim and lose their cellphones or wallets.

A vendor selling her wares watches the scene with a casual look. She is used to it.

“It’s actually better today. Yesterday, people were still stuck here by 8pm. It’s sad for those who live in unsafe neighbourhoods,” she said.

A few private vehicles circle around, but are wary of police details parked close by.

Since the government ban of private commuter omnibuses, popularly known as kombis, from operating as it ordered that owners should register their vehicles under the Zimbabwe United Passenger Company (Zupco) franchise, commuters have borne the brunt of the transport challenges.

Last year in March, President Emmerson Mnangagwa placed a temporary ban on the operations of private kombis as part of measures to contain the spread of the COVID-19 pandemic.

The ban was made permanent later in the year, dashing all hopes of bringing the much-needed relief to the commuters who largely rely on public transport.

In a statement at the time of the ban, Local Government minister July Moyo defended the decision saying: “Government is committed to having sanity in the urban transport services, and law enforcement agents have the authority to penalise those who contravene the law. As for pirate vehicles (mushikashika), they are illegal.

“Any kombi or bus operator trying to ply intra-city routes in Harare or any city/town in Zimbabwe without a Zupco sticker, pirate vehicles, all vehicles using undesignated pick-up points, risk being penalised and having their vehicles seized as provided for in the obtaining legislation.”

He said government was concerned with the illegal operation of private kombis in urban areas.

“The government strongly advises the private operators and the public, that urban transport services for the carriage of passengers, is restricted to those provided by the Zimbabwe United Passengers Company (Zupco) as provided for in section 2(a) of Statutory Instrument 83 of 2020, Public Health (COVID-19) Prevention, Containment and Treatment) (National Lockdown) Order 2020.”

The ban has left many employees and schoolchildren who were using hired transport stranded since Zupco buses are failing to cope with demand.

The Passengers Association of Zimbabwe (PAZ) recently said the shortage of Zupco buses was resulting in overloading, a situation that was conducive to spreading the deadly COVID-19 pandemic.

“Schoolchildren are suffering the most as there is no transport,” PAZ said.

“Passengers are loaded like cabbages. A Mutare-bound bus (witnessed by PAZ) was overloaded to the door. Some passengers were complaining of heat in the bus since opening windows was not ideal due to the heavy rains which fell between Harare and Macheke,” PAZ said.

Wading into the transport furore which is now trending under #BringBackKombis, opposition MDC Alliance leader Nelson Chamisa in a tweet said “command transport” should end.

“The illegal Zupco monopoly has left many jobless, brought suffering, leaving many stranded or in overcrowded rickety buses and resorting to insecure open trucks,” he tweeted.

“Zupco is potentially a COVID-19 super spreader, but ‘chefs’ do not care.”

Zupco management called on commuters to be patient as the parastatal was in the process of acquiring more buses.