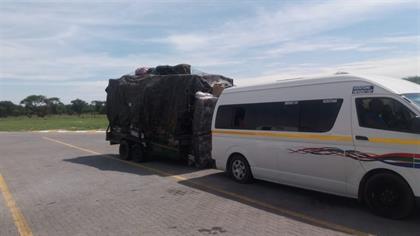 Limpopo traffic authorities remain worried during the festive season about the surge in the number of unroadworthy vehicles – mostly en-route to Zimbabwe – that slip through roadblocks in other provinces.

However, provincial Transport Department spokesperson, Matome Moremi-Taueautsoala, on Wednesday told News 24 that a plan was being activated to root out the problem.

Most of the vehicles found in violations of the law were travelling from the Gauteng province, and some as far as Western Cape and Kwazulu-Natal.

“We have agreed with JMPD [Johannesburg Metro Police Department] to have joint operations,” Moremi-Taueautsoala said.

Since the beginning of the festive season, traffic and police officers in Limpopo have had their hands full dealing with some serious traffic violations and criminal activities by people mostly travelling to cross the Beit Bridge border post with Zimbabwe.

Some of the violations include overloading, drivers on public transport without licenses, stolen vehicles and goods being smuggled over the border and illegal foreign nationals.

For instance, a 22-seater minibus taxi was recently found with 44 passengers and seven children.

Explaining the root of the problem, Moremi-Taueautsoala said: “From the 14th [of December] after realising that we have locked down the N1, some motorists began to use alternative routes on the knowledge that municipal traffic officials don’t work 24 hours [a day].

“They will use remote roads in towns like Lephalale, Groblersdal and districts such as Mopani. Others are even taking chances through the R101 national road. Then they again take chances and join the N1 in Polokwane where most of the arrests are made.”

But he said municipal traffic departments will be placed on high alert 24 hours a day to assist in dealing with the problem.

“Most of these motorists have knowledge of these shortcuts routes,” he said.

This was after a closed truck was found travelling from Gauteng and en-route to Zimbabwe transporting a stolen Range Rover, LED TVs and other goods.

The Hawks, together with Crime Intelligence, also arrested a suspect involved in a cross-border car smuggling syndicate after a high speed car chase on the N1 near the Hendrik Verwoerd tunnel. His alleged accomplice managed to escape.

Authorities believe the situation at the border, which is the busiest in South Africa, will remain the same until early January 2019.