Herald Reporters
Congestion persisted at Beitbridge Border Post yesterday, with large numbers of Zimbabweans driving north and hoping to be home for Christmas and New Year, although the surge is only a third as large as the normal year end rush.

But curfews and health checks are delaying processing at the border post.

Traffic at Chirundu and Kariba border posts is also significantly lower compared to the same period last year, but there is no real surge as there are few people on either side trying to get home for Christmas.

South Africa is different as many Zimbabweans work or live there and besides the normal festive season surge in traffic, many of these have been unable to come home and return to work since the start of Covid-19 lockdowns on both sides of the border.

Until December 1, only commercial cargo, bodies for burial, returnees and diplomats on Government business were allowed into either country.

And while Zimbabweans in South Africa had an absolute right to come home, it was a one-way trip until the lockdowns were lifted as they would not be able to get back to South Africa.

Zimbabwe opened its land borders, including Beitbridge, at the beginning of this month, with private motorists and pedestrians now travelling under strict regulations to manage the risk of Covid-19.

Implementation of the curfew on the South African side of the border runs between 10pm and 4am coupled with strict Covid-19 screening, which is slowing down the movement of traffic.

After 10pm only commercial cargo is allowed to travel through Beitbridge Border Post, resulting in vehicles piling up on both sides of the border.

Although, there appears to be many people at the border, official statistics show that less than one-third of the usual volume of traffic during peak periods, is using the border.

“Before the Covid-19 pandemic, the border used to handle at least 30 000 travellers per day and currently, the average figure is 6 500. The issue of implementing curfew regulations and slow Covid-19 screening has caused a lot of delays,” said one border official. 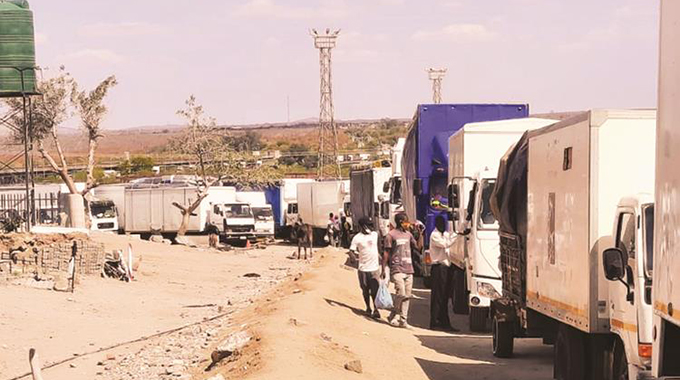 According to a cross-border transporter, Mr Trust Ndlovu, the slow movement of traffic at the border was likely to see some families having a dull festive season.

“Something has to be done about the situation here. Imagine I haven’t moved for 1km since arriving at the border at 5am,” said Mr Ndlovu.

“When the Government reopened the land borders, most of us were happy that we would be able to transport groceries and all the basic commodities we have failed to move at the peak of the lockdown.

“If we look at the rate at which things are moving here, we won’t manage to make deliveries to all our clients.”

Another motorist, Mr Brian Tshabangu said: “We have a crisis here. We don’t know if we will be able to cross over to South Africa today. We have cleared everything on the Zimbabwean side and have been waiting in this queue for a very long time.”

Security staff are strictly screening travellers for valid documents which included passports and Covid-19 clearance certificates. It is understood that a total of 1 015 people have since December 10, been arrested at the border for violating immigration laws.

Authorities at Chirundu Border Post are handling between 400 and 500  travellers a day compared to around 1 500 during the same period in years gone by.

Regional Immigration officer Mr Joshua Chibundu said most of the people being cleared at the border were truck drivers. 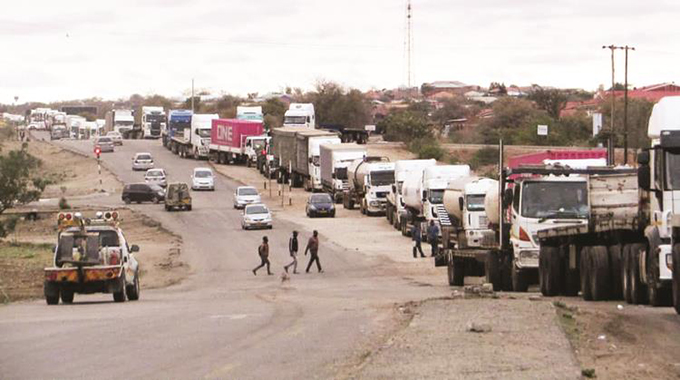 “We are mostly clearing truck drivers who have been travelling even during the Covid-19 restrictions. There has been a marginal increase in the volume of traffic in recent days but it still falls far short of the numbers during normal times,” said Mr Chibundu.

One of the major stumbling blocks for travellers had been the sparse distribution of laboratories authorised to issue Covid-19 certificates while the 48-hour validity period had also deterred travellers.

Those who need to get tested and issued with Covid-19 certificates in Mashonaland West province have to travel to Chinhoyi Provincial Hospital.

“The certificate is valid for only 48 hours and that affects the planning of people who have to go to Zambia and conduct their business and come back within 48 hours.

“This means less time for some to conduct their business if they are coming from Harare and any other part of the country,” said a traveller at Chirundu.

The situation at Kariba Border Post had not changed with the usual low volume of traffic being the order of the day.

Traffic is expected to increase marginally as Christmas Day gets closer.