Consolidation of the Rule of Law: Chief Justice

The Chief Justice’s Theme for the 2019 Legal Year:

Source: Consolidation of the Rule of Law: Chief Justice – The Zimbabwean 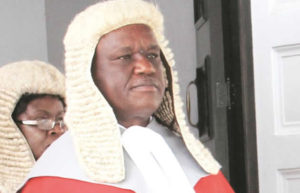 “Consolidation of the Rule of Law”

There has been much talk recently about the need to strengthen the rule of law which has prompted Veritas to summarise the Chief Justice’s speech at the opening of the 2019 legal year – “Consolidation of the Rule of Law”.  [The full text is available on the Veritas website [link]].

The Chief Justice’s starting-point was that:

“The rule of law is the foundation of any democratic society and is essential to the cohesion of a community.  …  In itselementary sense, the rule of law simply implies that no-one is above the law and that all existing laws must berespected by everyone.  Individuals, corporate entities, the State and all its organs are subject to the law and are allequal before the law.  The concept provides a framework for the orderly and objective relationship between citizens andthe State and among the citizens themselves”.

Respect for Court Decisions Essential to the Rule of Law

While acknowledging the existence of other role players in upholding the rule of law, the Chief Justice identified the courts as:

The courts are obliged to ensure both procedural and substantive fairness to both sides in cases before them, to make a finding as to the facts and to apply the law to those facts in reasoned judgments.  In the circumstances, the Chief Justice said:

Instead of resorting to insulting and denigration of judicial officers, unsuccessful litigants  should, he said, make use of the rule of law’s “inbuilt self-correcting mechanisms”, which allow anyone who is aggrieved with the decision of a court to take it on appeal or review:

But judges not immune from criticism  Respect for judges’ decisions, the Chief Justice continued, did not mean that their decisions are immune from criticism.  The rule of law concept encourages scrutiny, comment and even criticism – as long it remains “professional, impersonal and constructive” and is made without being “scurrilous” about the judicial officer:  “Comments which degenerate into confrontational or personal insults on judicial officers have no place in this jurisdiction.”

Starting with the proposition that “corruption is the antithesis of the rule of law”, the Chief Justice said the Judicial Service Commission and the judiciary were playing their part in the fight against corruption.

Streamlining corruption-related offences from the normal run of cases had been considered necessary because they are usually complicated crimes, perpetrated by sophisticated and well-resourced individuals.  But, said the Chief Justice, this did not imply “trampling upon the rights of those accused of corruption” to fair hearings.

“It simply requires lawyers, judges and magistrates to take cognisance of the harmful effects of the scourge of corruption on the livelihoods of all Zimbabweans.  If we do not coalesce around this scourge, we all stand to be doomed as a nation.”

Decades-old and sometimes obsolete rules of court had been reviewed and replaced under the stewardship of the Judicial Service Commission – for example, the new Labour Court Rules and Supreme Court Rules had been gazetted.

New Magistrates Court Rules would be gazetted in time to come into force on 1st February 2019.

Note: the Magistrates Court Rules were gazetted on 25th January in Statutory Instrument 11/2019 and are available on the Veritas website [link].

Replacement of the High Court Rules of 1971 had already been extensively debated by stakeholders. During the first half of 2019 the new rules would go to the Attorney-General’s Office to be finalised.

High Court  The new Mutare High Court had been opened in May 2018 and would operate with two resident judges from January 2019.  Three new courtrooms had been commissioned at the Bulawayo High Court, which would improve the turnaround of cases and enable increasing the number of judges in Bulawayo in due course.

Magistrates Courts  New magistrates courthouses were scheduled for completion in Mount Darwin and Lupane by June 2019.

New magistrates and supporting staff  Following a reversal of the freeze on recruitment, 233 new officers had been recruited from July to November of 2018.  60 of them were magistrates, 57 of whom had already been deployed to various stations across the country, where they had alleviated shortages.

Regional courts  The number of regional magistrates had been increased and Chipinge, Plumtree, Karoi, Beitbridge and Guruve had been raised to regional status.

The Chief Justice confirmed that:

a “huge portion” of the recently recruited officers had been female;

Note: The 64 judges referred are the judges of the Constitutional and Supreme Courts, the High Court, the Labour Court and the Administrative Court.

Performance of the courts

All judicial officers, the Chief Justice said, had performed “pleasingly” in 2018.  There had been good performance in all courts and an overall reduction in backlogs of cases.

Constitutional Court  The number of cases filed had dropped from 70 in 2017 to 59 in 2018. The Chief Justice commented that “the number of cases received are still far higher than expected in an apex court”.  The backlog of cases had been reduced from 68 in 2017 to 42 by the end of 2018.

Note: the Chief Justice did not give figures of the number of outstanding judgments yet to be delivered and the average delay in delivering them.

Calling on all judicial officers to ensure that “quality justice” prevails in the courts, Chief Justice Malaba reminded judges of all superior courts of their constitutional “responsibility to model the country’s jurisprudence by developing the common law for the sustenance of the rule of law”.  During the year 2019, all judicial officers would be exposed to various forms of training within and outside Zimbabwe.  Some Zimbabwean judges would join other judges from SADC countries for a training session in Victoria Falls in the first week of February.

Other Plans for the Future

Labour Court  The court would move into a new more spacious building once it had been renovated and customised to the court’s needs.

Commercial Division of the High Court  The establishment of the court would be a priority for 2019.  It would operate from the former premises of the Labour Court once the building had been customised into its special needs.  The aim was to have a paperless state-of-the-art court with an Integrated Electronic Cases Management System.  The court would be capable of dealing with commercial disputes expeditiously as part of Zimbabwe’s efforts to open the country for business by re-opening factories and inviting foreign direct investment.

Constitution of Zimbabwe as amended by Act 1/2017 [link]

Newer Post
Of religion, hair and the law
Older Post
Don’t worry, your weakness is the required ingredient for your success!