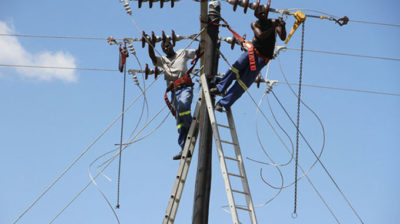 Johannesburg, South Africa – Zimbabwe recently resumed the construction of the $1.5 billion Hwange Expansion Project for Units 7 and 8 as it aims to progressively implement the Vision 2030 which will transform Zimbabwe into an upper middle class economy.

The $1.488 billion project is being funded by China Exim Bank, Sinohydro and Government through Zimbabwe Power Company (ZPC).

Reports said the foundation stone at Hwange Power Station was laid on March 1. Sinohydro is undertaking the expansion project in conjunction with the ZPC. The two companies have formed Hwange Electricity Supply Company (HESCO) to implement the project.

“Today marks an important milestone,” said Energy and Power Development Minister Dr. Joram Gumbo after touring the facility. “May I hasten to say since the inception of the expansion works, the project has seen considerable progress on the ground and is on schedule. The process of laying the foundation signifies the commencement of real construction works in a journey that will take us to the promised land of security of electricity supply as we set our sights towards the successful implementation of Vision 2030 which will transform Zimbabwe into an upper middle class economy.”

Gumbo also said the expansion project is a key economic enabler as it would positively impact on the economy through the employment of in excess of 3 000 people and enhance skills transfer. Already, 450 people from around Hwange have been employed.

Excavation work has been done while conceptual designs for the power plant, substation and transmission lines have been finalized. President Emmerson Mnangagwa did groundbreaking for the project in June last year.

Upon completion in 2022, the project will increase power generation from the current 600 MW to 1,200 MW. The power station has a capacity of 900 MW but is currently generating 600 MW.
To enable transmission of additional power from the new plant, there will be need for construction of new powerlines from Hwange to Insukamini and Sherwood for stability as currently power is transmitted using 3 x 330Kv powerlines.