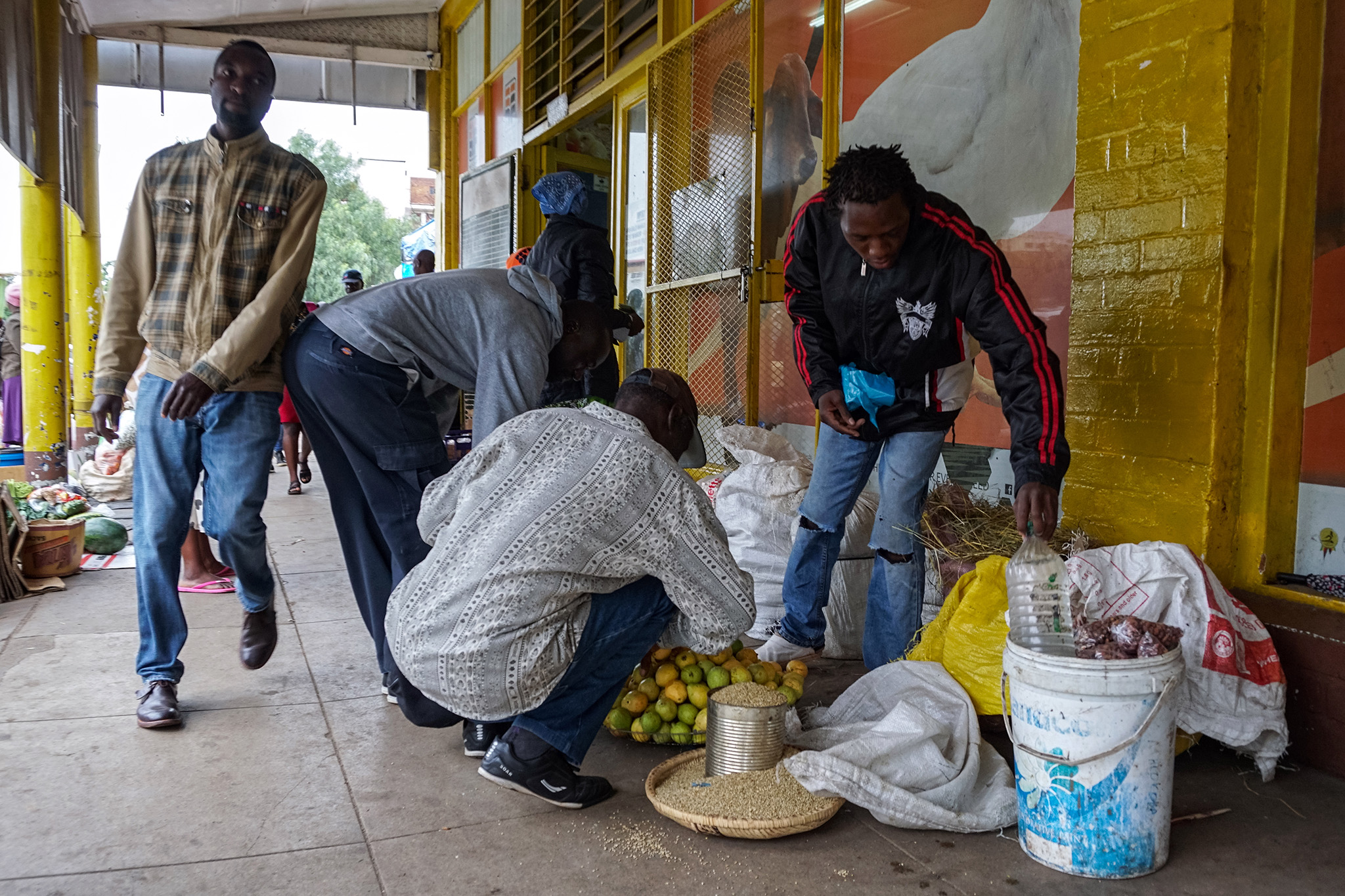 Workers at a crowded market in Bulawayo’s central business district sell fruits and vegetables in February before the coronavirus crisis erupted in Zimbabwe. In March, Mayor Solomon Mguni shut down all informal markets across the city. Fortune Moyo, GPJ Zimbabwe

The national lockdown has dealt a major blow to the sector, where millions of Zimbabweans find work. Street vendors, construction workers, sellers of secondhand clothes and many others search for new ways to make money.

Now he sells fruits and vegetables out of his home.

The coronavirus has upended the lives of millions in the country’s informal labor market, which includes sellers of secondhand clothes, street vendors, tailors, construction workers and many others. More than 90% of Zimbabwe’s workers are engaged in the informal sector.

The virus has threatened their already-fragile livelihoods and left many in the country grasping for new ways to make money.

Their struggle began after the virus struck in late March, when the national government locked down all nonessential businesses and services.

The city’s five secondhand clothes markets were usually packed with scores of customers jostling one another in the aisles. Some bent over heaps of clothing, while still others tried on shoes. Their murmurs and shouts echoed from a distance.

All of this made both sellers and buyers vulnerable to the coronavirus, which spreads via microscopic droplets from the nose and mouth. Vendors at a secondhand clothes market in Bulawayo try to make sales 48 hours before the coronavirus lockdown begins. The lockdown has had a disproportionate effect on the country’s massive informal sector. Fortune Moyo, GPJ Zimbabwe

Before the lockdown, Dube, 35, made as much as 350 Zimbabwean dollars (ZWL) ($14) a day hawking skirts and women’s shoes along with men’s clothing. He still sold clothes for a few days after the ban, but his earnings plummeted to about 65 ZWL (around 78 cents) a day.

Most informal traders have scuffled to buy food and medicine since the lockdown, says Michael Ndiweni, executive director of the Bulawayo Vendors and Traders Association.

“Even after the lockdown, most will struggle with restocking their businesses and also other obligations such as paying their bills,” he says.

Informal traders got good news at the end of March when the Zimbabwean government reintroduced the use of foreign currency. The local currency is still in use but is now pegged to the South African rand and the United States dollar.

He says he makes at least $8 a day — less than when he sold secondhand clothes but more than he did before the government’s about-face on foreign currency. Still, it’s not ideal.

“We have an extended family which depends on us,” says Sithabile Dube, Reuben’s wife. “The reduction of our income due to the lockdown has affected the way we look after our family.”

Other sellers of secondhand clothes have shifted their markets to Bulawayo’s suburbs, but they’re struggling. Nomazwe Dungeni, who lives in the Cowdray Park area, hasn’t gained traction in her new location near a cluster of shops.

“There is not much business as compared to the city center,” she says.

Customers are complaining, too. They say they now have to patronize retail shops, where prices can be multiple times higher than those of secondhand clothes sellers.

Chipo Sithole says that skirts and dresses may cost up to $25 at Bulawayo shops but that she typically pays $1 to $5 for secondhand versions.

“Now I have to wait for the settlement areas,” she says, referring to planned selling posts for the informal sector in less densely populated areas of Bulawayo. The government has tagged these posts “settlement points.”

The points, which should open in October, will sit near bus terminals located close to supermarkets and shopping centers. They will offer spots to secondhand clothes sellers, fruit and vegetable vendors and other informal workers.

“Since no one knows when COVID is ending, we are already setting up settlement points for the informal sector to survive long term,” says Dingani Dlomo, the Bulawayo provincial development officer in the Ministry of Small and Medium Enterprises.

In July, Zimbabwe’s government extended the national lockdown. Only essential services, such as hospitals and public transportation, may operate as normal.

Dube, who has 2- and 10-year-old boys, works every day. By 7 a.m., he sets up his stall at his gate with bananas, potatoes, apples, cabbage and carrots.

Throughout the day, he wears a protective mask and regularly uses hand sanitizer. He closes up around 6 p.m.

Dube plans to set up at a settlement point once the government opens them, but even then, he’ll also still sell fruits and vegetables as a hedge against the ongoing lockdown.

“A prolonged lockdown would be unfortunate,” he says, “because we long for life to go back to the way it was before.”