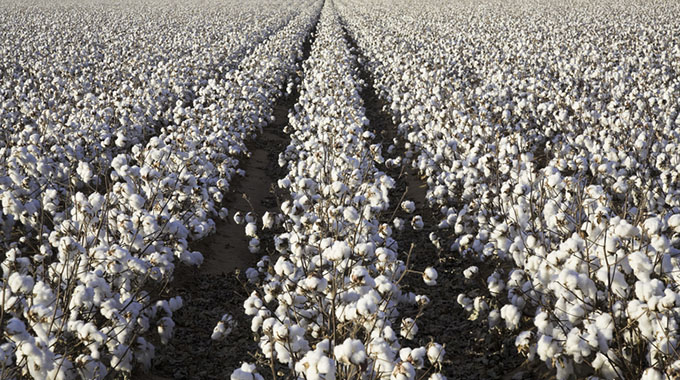 Business Reporter
NATIONAL cotton deliveries by farmers have reached 120 000 tonnes, exceeding this year’s target by 20 percent, the latest figures from the Cotton Company of Zimbabwe (Cottco) have shown.

Deliveries to Cottco, Zimbabwe’s biggest cotton financier, have increased by 122 percent from last year’s and 1 100 percent from 2015 when output slumped to record low of 10 000 tonnes.

At peak in 2013, Zimbabwe produced 352 000 tonnes, but output plummeted during the following years due to poor funding.

Over the past three seasons, Government has been financing production through Cottco.

“We have reached about 120 000 tonnes, but deliveries are still trickling in,” Pious Manakime, Cottco managing director told The Herald Business in an interview yesterday.

In some areas, particularly Masvingo and Manicaland Provinces — deliveries had slowed down due to shortages of wool packs, but the situation has since improved.

“We have taken a delivery of new wool packs and you should start collecting them at the buying points,” Ms Marjorie Chaniwa, Cottco head of operations told farmers in Rutenga at the weekend at an event to officially launch the 2018 inputs programme.

Ms Chaniwa said the company would this year offer tillage services to high potential farmers and those with challenges of draught power.

“It is a new programme that we will be rolling out this season and we are targeting at least 50 000ha,” she said.

The Government’s Presidential Free Cotton Inputs Scheme has helped the vulnerable marginalised farmers who have been suffering from the high cost of inputs and low producer prices at the same time getting their yields affected by the negative effects of climate change.

The farmers have responded positively by “going back to the fields” and are producing cotton whose volume has been constantly growing.

Given that the output was on a free fall, the interventions by the Government came at the right.

“The response we are getting is quite overwhelming and we are hoping to have more farmers to be assisted under the programme this year. We will also intensify efforts to ensure that farmers are more productive as we seek to improve yields and crop quality,” said Ms Chaniwa.

The early distribution of inputs would help farmers to plan ahead, unlike in previous seasons when some farmers would receive inputs late.