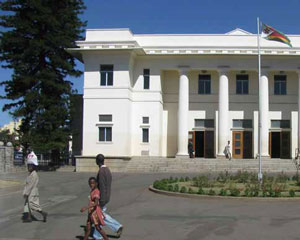 Bulawayo City councillors want only rate payers paying in foreign currency to use the local authority’s main Revenue Hall as a measure to decongest the place and stop the spread of Covid-19.

This was revealed in the latest council minutes under a report by the finance and development committee.

According to the minutes, ward 17 councillor Sikhululekile Moyo was worried about residents who queued for a long time at housing offices.

“Most housing offices did not have adequate staff. This was negatively affecting very old residents who had challenges in marking online payments,” read the minutes.

‘Council staff at revenue/ housing offices should be increased. Councillor Silas Chigora noted that Revenue Hall was always crowded because most low density areas had no housing office.

“He was also concerned about  utility bill payments done online, which had not been credited into respective accounts.”

Mayor Solomon Mguni said many residents preferred making payments at the Revenue Hall and encouraged councillors to persuade them to use online payment platforms.

“A report had been made with regards to people who were collecting foreign currency from the residents at black market rates and then paid to council in local currency.

Ncube was of the view that Revenue Hall operating times should be reviewed and only residents paying foreign currency be allowed inside.