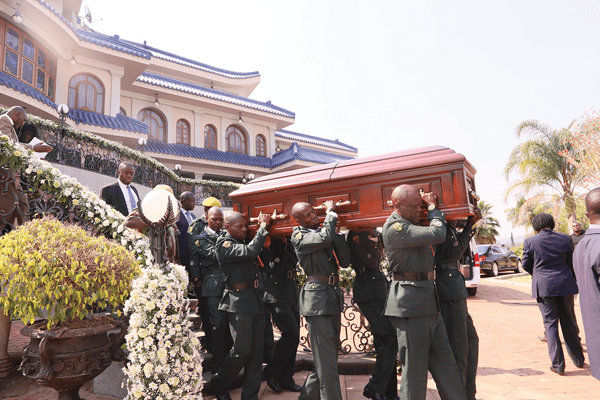 A CHINHOYI magistrate yesterday gave the nod for the exhumation of former President Robert Mugabe’s remains from his rural home in Zvimba after dismissing an appeal filed by the late Statesman’s family challenging a reburial order given by a traditional court in May this year.

The latest development paves way for reburial of Mugabe’s remains at the National Heroes Acre in Harare, a decision the family had protested against saying the former Zanu PF strongman, who died in Singapore in September 2019, had indicated that he preferred to buried at his rural home.

In dismissing the family’s appeal, magistrate Ruth Moyo said Mugabe’s children — Bona, Tinotenda Robert Jnr and Bellarmine Chatunga — had no locus standi to challenge Chief Zvimba (Stanley Wurayayi Mhondoro)’s verdict since they were not part of proceedings at the traditional leader’s court.

“There was no appeal before the court,” she ruled.

“The appellants can not appeal against default judgment.

“On the basis that the court finds that the present appellants can not appeal against a decision they were not a party, the court will not proceed to deal with the second and third points in ilimine since this point on its own disposes of the matter.

“On that basis, the appeal before this court is dismissed, no order as to costs.”

The court heard that the matter before Chief Zvimba’s court involved Tinos Manongovere as applicant and Mugabe’s widow, Grace, as respondent.

The family had argued that Chief Zvimba had no judicial jurisdiction to interpret legal acts from a superior authority.

Chief Zvimba’s lawyer, Pardon Nhokwara said he was happy with the magistrate’s ruling.

“Yes, we are very happy with the court’s judgment,” Nhokwara said.

But Mugabe’s lawyer, Fungai Chimwamurombe dismissed the ruling as absurd.

“The absurdity of the judgment is more apparent in that the relevant section permits ‘any person’ as opposed to a ‘party’ to be able to appeal,” Chimwamurombe said, adding that he was consulting his clients on the way forward.

“I will talk with my client over the judgment and they will advise me on the way forward.”

Chief Zvimba, in May fined Mugabe’s widow, Grace, five cows and two goats for forcing the burial of her husband at his rural home. The chief claimed several people had complained to him over the manner in which Mugabe was buried.

Some of Mugabe’s family members accuse Mnangagwa of orchestrating the exhumation for political expediency.

Mugabe’s family spokesperson, Leo Mugabe in May said Chief Zvimba lacked jurisdiction over Kutama and moreso on the matter, vowing Mugabe would not be exhumed.

After the ruling, Zimbabwe People First spokesperson Jealousy Mawarire, a confidante of the Mugabe family tweeted: “There is no exhumation that can be done without the consent of the family unless it’s a desecration of the deceased’s grave, another coup that (President Mnangagwa) and his Junta-PF are after.”