As the infection rate in the third wave of Covid-19 continues to inch down, although the death rate was largely static last week, more than two million Zimbabweans have entered the national vaccination programme with around 1,2 million now fully vaccinated.

By the end of last week, on Saturday, the rolling average of daily infections had sunk to 566 a day, less than a quarter of the 2 355 seen on July 15, the peak of the wave, but still around 16 times the rate between waves.

The rolling average for the death rate, after a dramatic drop in the previous week, was still between 38 and 41 for most of the week, but was finally starting once again to inch down by the end of the week.

Death rates tend to lag infection rates because those who die have normally been sick for one to three weeks. 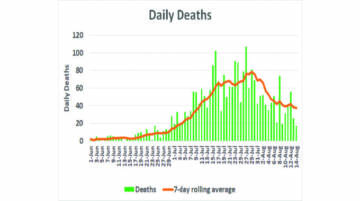 The continued highish infection rate was the reason the Government, as announced by President Mnangagwa, is maintaining the level four lockdown, with Cabinet approving the first major relaxation on Tuesday when it announced church services could resume, but with everyone fully vaccinated with both jabs and the church authorities ensuring those attending were masked and sanitised and were maintaining social distancing.

Last week also saw several milestones in the national vaccination programme. By Saturday more than two million Zimbabweans had entered the programme, with the two millionth person getting their first shot on Friday.

By yesterday there were 2 064 314 Zimbabweans who had taken the vaccination plunge and had at least one dose, with 1 224 715 having had the second shot.

There were still 837 918 people who have had one shot and are now ticking off the days until their second shot.

Earlier in the week, on Wednesday, the three millionth dose was given.

Despite the large number of people getting their first dose in most of July, and those are the people now coming forward for their second doses, the August acceleration of the programme has seen the vaccination teams still coping with large groups of first timers as well as the now large groups of second timers. 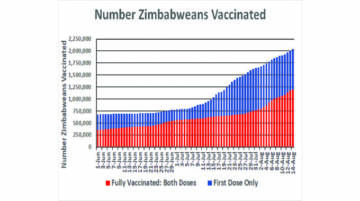 Without that August upgrade in the teams we would now be seeing most doses given to second timers rather than roughly equal daily numbers of both.

Despite the large increase in first doses each day from early July as large and regular shipments of vaccines starting arriving from China, the upgrade in the teams meant that on July 22 the number who had both doses finally overtook the number with only one dose.

By the end of last week almost 60 percent of those who had lined up for their jabs were now fully vaccinated.