Herald Reporter
President Mnangagwa is ready to put in place any needed measures to contain the spread of Covid-19 infections after the recent spike in local transmissions.

Until recently, almost all Zimbabweans found to be infected were returning citizens and residents infected outside the country with the infection discovered while they were in quarantine. But the recent daily double figure rise in confirmed cases has sent alarm bells tolling, prompting President Mnangagwa to make it clear that he will take measures to control infection rates.

Under new Government policy, special attention will be given to hotspots and clusters of infections to contain outbreaks quickly and early.

Speaking yesterday after receiving a new batch of donations to support the battle against Covid-19, President Mnangagwa said Africa was now under serious attack from Covid-19.

The Ministry of Health and Child Care said while one of the new local infections was a contact of a known patient, investigations were still in progress to identify the source of the other 21. Zimbabwe has 395 confirmed recoveries and 20 deaths. 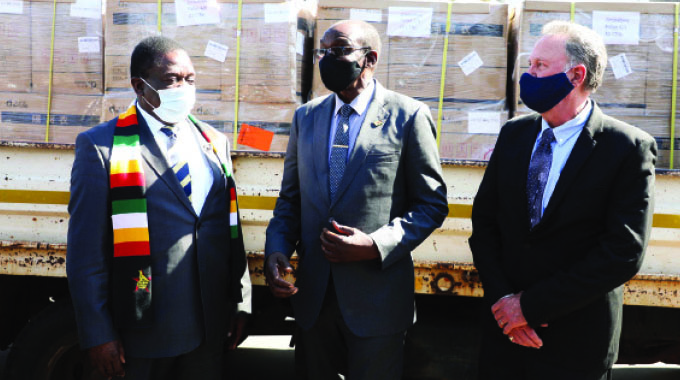 South Africa now has 4 346 deaths from just under 300 000 confirmed cases, but the daily rate of infection is finally falling.

President Mnangagwa said the virus, which negatively affected developed nations that have first class health systems, appeared as though it was not a huge threat to Africa in the early days but was now affecting the continent, though differently, a move that has driven him to consider imposing further restrictions and measures to reduce the pandemic’s spread.

“With the surge in the Covid-19 cases, I am likely to impose further restrictions and measures. We think that we are not yet out of the woods. Those who do projections say to us that this is just the beginning. We are yet to see the worst.

“I appeal to our people not to be complacent. We should continue where possible to contribute towards fighting and mitigating against this  pandemic.

“Initially, I declared a national lockdown because I felt as President that we are on a weak platform to deal with pandemic and when I felt that the machinery had begun to work to capacitate our systems, I relaxed some of the measures recommended by the World Health Organisation, but now with the surge that is coming around, I am likely to impose further restrictions and measures,” he said.

The President said the decisions would not be easy as they affect industrial production and people’s livelihoods, but Government’s priority was on saving lives for a period and survive the pandemic and then pick-up the pieces and move on at some point.

“My belief is that even before the arrival of the pandemic in Zimbabwe, we had problems with the economy. It is most critical that we save lives so we can sit around again and discuss about restructuring and reconstruction of our economy. So I say this because I think that I have to move with the nation on the need to save lives as a priority and protect the economy as a second priority,” he said.

The President received donations towards the fight against Covid-19, and Cyclone Idai humanitarian relief at the State House.

He received donations of personal protective equipment from Angel of Hope Foundation, which donated over 32 000 pieces, while Zundine Trading handed over 5 000 tests for antibody rapid tests and 5 000 for antigen tests. Multichoice Zimbabwe donated 3 500 disposable isolation gowns, and 3 500 disposable face masks, and Cure Chem Overseas donated 3 900 masks and 65 litres of sanitisers. 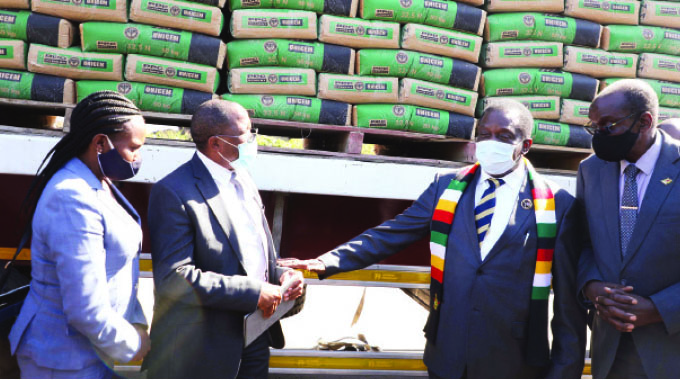 PPC Zimbabwe donated 1 800 bags of cement towards the resuscitation of infrastructure in the Cyclone Idai affected areas.

The President expressed gratitude to the local and foreign organisations for their contributions towards the fight against Covid-19, adding that he had no power to compel anyone to donate, but it was within their own compassionate feelings that the companies and individuals had come forward to support Government.

He said Zimbabwe has to move on and do its best, adding that the country now has a number of institutions that have been upgraded to deal with serious Covid-19 cases.

Chinese billionaire, Mr Jack Ma and the WHO, were praised for their continued assistance, through the African Union.

“I am grateful to China, the financial assistance extended to us by the European Union, United Kingdom and initially the US$400 million that came from my brother (US President Donald) Trump. I have been informed that there is a possibility of the US extending US$60 million to Zimbabwe. We are grateful.

“What is most pleasing is the response from our people in Zimbabwe. It is individually as communities as churches, private organisations industry and commerce, with regard to churches. Some of the churches offered us their own infrastructure for us to use,” he said.

The President said the Inter-Ministerial Taskforce was going to be complemented with other people from the community to broaden representations and mobilisation of materials to fight the pandemic.

He said there should be transparency in the handling and distribution of donations.

“All records are kept and we have agreed to publish on weekly basis the disbursements of all donations that have come and the disbursements are guided by the needs through NatPharm under the Ministry of Health and Child Care,” he said.

South Korean Ambassador to Zimbabwe, said Mr Do Bongkae said South Korea was willing to work with Zimbabwe in fighting the pandemic.