Farirai Machivenyika and Zvamaida Murwirwa
Zimbabwe can now start rolling out its Covid-19 vaccination programme following the arrival yesterday of 200 000 doses of vaccine from China, with President Mnangagwa hailing the Asian giant for the high level of steadfast and continuous support  it is giving Zimbabwe.

Along with the gift yesterday, China will supply a further 600 000 doses bought by the Government, and expected to arrive next month. Zimbabwe has been promised supplies from Russia, India and the United Kingdom together with its share of the facilities arranged by the World Health Organisation and the African Union. The Government has already mobilised US$100 million to buy vaccines.

Receiving the Chinese gift at State House yesterday from Chinese Ambassador Guo Shaochun, President Mnangagwa said the unwavering partnership between the two nations is evidence of the strong bilateral ties.

“This donation from China could not have come at a better time. Ambassador, being resident in Zimbabwe you are only aware of the collective grief that our entire nation has gone through.

“Indeed, my Government was not spared as we have laid to rest no less than six of our illustrious sons and a daughter who included members of my Cabinet and two of my ambassadors.

“As I accept this donation on behalf of the Zimbabwean people let me express my appreciation to China for always being a steadfast partner to the people of Zimbabwe,” the President said.

On the diplomatic front Zimbabwe lost its Ambassadors to the United Arab Emirates (Jethro Ndlovu) and Mozambique (Douglas Nyikayaramba).

In his remarks Ambassador Gao said Zimbabwe is among the first 14 countries to receive the Sinopharm vaccine, something that shows the strong ties between the two countries.

“Since early last year, we have stood firmly together in this fight, giving each other confidence, courage and support. As you can imagine, with 1.4 billion people at home to vaccinate and orders coming in from around the world, China is facing enormous challenges in providing vaccines for those who need them. But our Zimbabwean brothers come first. There has never been any doubt about that,” said Ambassador Guo.

He commended efforts being made by Zimbabwe to contain Covid-19

“Under the strong leadership of President Mnangagwa, our resilient brothers in Zimbabwe fended off the first wave of attack of this virus and are making the second wave under control. I am confident this donation will reinforce your position in the fight,” he said.

“This is a timely donation given the recent ravages and tragedies that visited our nation through the Covid-19 pandemic,” VP Chiwenga said.

“You have been here and you have seen how our people have suffered from this pandemic. We receive this vaccine as a dream of hope to the nation that finally we may be on the verge of returning to some semblance of normalcy, that is what we are aiming to achieve.

“The vaccine also offers the possibility that our people who have borne the brunt of the economic ravages of the pandemic might finally turn a new page following the unfortunate interruptions to the economic activities that have been necessitated by the need to control the virus.”

He said it would have been easy for China to direct its efforts in vaccinating its own population and said the country had played a big role on the international stage in curbing the spread of the disease.

“It has not been lost to us that in our times of need China’s response has been swift, resulting in this vaccine being the first to reach our country,” he said. 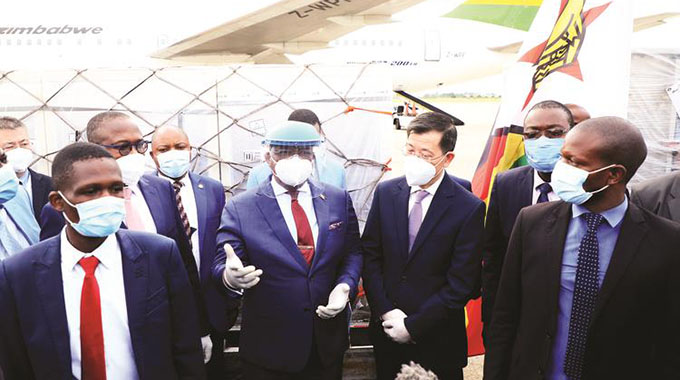 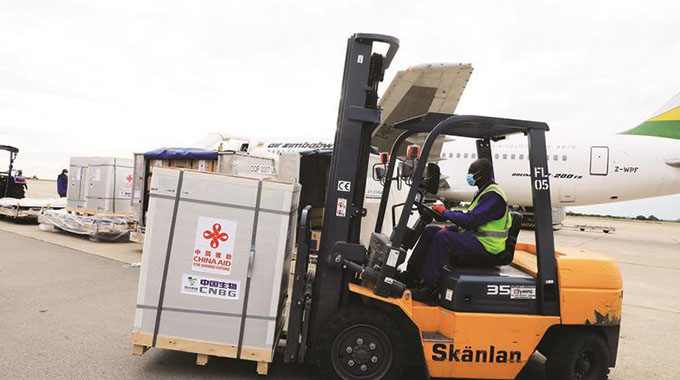 Addressing the gathering early morning yesterday Ambassador Guo said the donation was part of the assistance China has rendered to Zimbabwe in various sectors.

“This is a major assistance programme in Zimbabwe from China and we are also discussing the procurement of the Covid-19 vaccine with Zimbabwe and we will ensure the affordability for Zimbabwe and this is the promise of the Chinese President and I think in the future we will see more successful cooperation between our two countries,” he said.

Prof Ncube said the country would take delivery of a further 600 000 doses from China next month and was targeting to procure 1,3 million doses from the Asian country.

Deputy Minister Mangwiro said the frontline workers, especially medical personnel would start receiving the jabs by the end of this week with the elderly and those with underlying conditions then being prioritised.