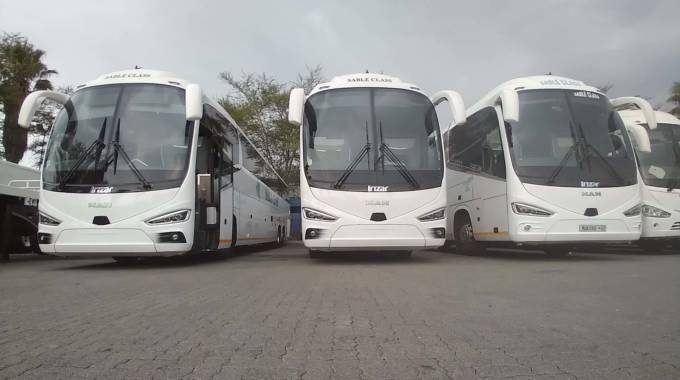 BUS crews carrying voluntary returnees from South Africa yesterday abandoned their vehicles in Beitbridge in protest over alleged corruption by security officers who were reportedly demanding bribes of R2 500 per bus for passage at roadblocks.

The drivers refused to drive back to Beitbridge Border Post where the police ordered them to go and be searched by the Customs and Excise Department so that they could proceed with their trips.

Beitbridge police officer in charge, Assistant Commissioner Cosmos Masepa, who is in charge of an operation against smuggling and border jumping told Southern Eye that the buses were actually carrying contraband.

“We have stopped them because they are carrying contraband.  Some of them have just got six passengers on board and goods. We sent them back to the border so that they can be checked to ensure that duty is paid,” Masepa said.

He said the buses were turned back because there were no Customs and Excise teams at the roadblocks.

“Otherwise they could have been processed on site. These buses smuggle goods, and we are checking against that, “he said.

Representatives of bus crews, however, denied that they were carrying contraband.

They alleged that security officers were demanding bribes.

“We are saying enough is enough. They sent us back to the border where their colleagues would have cleared us. This is all being done to press us to pay bribes of R2 500 per bus. We are tired of this operation which has lost its meaning,” one of the drivers told Southern Eye.

Yesterday, more than seven buses were parked 10km outside Beitbridge.

“The government must come to investigate this situation, we carry voluntary returnees and these are being treated as border jumpers yet they pass through the Zimbabwean embassy in South Africa,” another bus driver said.