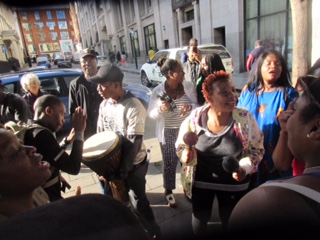 The mysterious visit to Zimbabwe this week by former South African president Thabo Mbeki, a long-time Zanu PF supporter, is a clear sign that things have reached crisis point in Zimbabwe.

The South Africans say that the hurried visit was at Mugabe’s invitation but Mugabe’s spokesman George Charamba said Mbeki had requested a meeting with Mugabe and the discussion was strictly private.

But an unprecedented feature of the lightning visit was a meeting between Mbeki and Zimbabwe’s security chiefs at a time of growing differences between them and Mugabe over the succession issue.

Service chiefs are believed to be pressing him to name Vice-President Mnangagwa as his successor and they were reported to have had a meeting with Mugabe on Monday urging him to settle the issue to end the increasingly bitter conflict in Zanu PF.

Last week, Mugabe publicly berated the generals for interfering in the political process. ‘There are secret manoeuvres going on’, he said. At the same party meeting Grace Mugabe called on him to name his successor, saying the party would rally behind his anointed ‘horse’ (tiudzei bhiza ramuri kuda timhanye naro muone henyu) – clearly a reference to herself!

Further drama this week came as soldiers beat up police in Harare in apparent retaliation for the police’s use of spikes to halt a military vehicle after an alleged traffic offence.

With more bond notes being pumped into the bankrupt economy and Zanu PF equally bankrupt of ideas to halt the downward spiral, the Vigil turns to veteran observer Cathy Buckle in Marondera for a snapshot of Zimbabwe on the eve of Heroes’ Day. ‘The ordinary people are Zimbabwe’s real heroes in 2017’, she concludes (see: http://www.cathybuckle.com/index.php?id=236)

FOR THE RECORD: 61 signed the register.