Currency dealers in Zimbabwe are repairing old US dollar notes 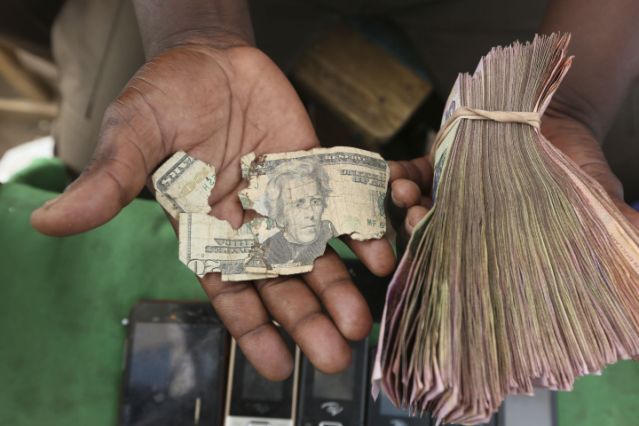 Many African economies were brought to a near standstill following COVID-19 lockdown. Trading, manufacturing, and export-a major economic forces in these countries were restricted because of the curfew, and as a result, the economic sector faced huge challenges.

Zimbabwe is one of these countries where the level of poverty and unemployment rapidly increased after the lockdown.

Covid-19 has hurt Zimbabwe so much that probably the recovery won’t come to the horizon for so long. The country suffered the worst economic crisis in more than a decade and the main reason for this is attributed to the pandemic.

The trading industry which was on the rise has literally stopped, tourism has also drastically decreased as tourists are restricted to go on safari or take a look at the Victoria Falls. But considering the fact that hyperinflation has never left the country since 2008, the pandemic can’t be the only reason for this extreme poverty.

Not only an economic crisis, but there are some other concerning issues in Zimbabwe, such as political instability, environmental problems, like water pollution and land degradation, but what recently caught the attention of the public is the problem of corruption and money laundering in the country. Specifically, traders have been noticed to have some unusual ways of overcoming economic problems.

It was recently reported that traders in Zimbabwe started to repair old, worn-out US dollar notes for their desperate customers. They tend to buy old notes and make a profit by repairing them and selling them to their customers.

The reason is that the new US dollar notes are not coming into the country and as a result dealers found this weird way of money laundering. In order to repair worn out US dollars, all they have to do is to make the serial number visible on all the sides and that’s it. Doing this has become a new way of survival in times of severe poverty.

Those people don’t even care whether a currency is shredded by rats or torn so much, they just mend shabby dollar notes and that’s how they try to overcome the crisis.

However, that’s not the strategy for every trader in this country. Most of the Zimbabwean traders involved in the forex trading industry use more delicate strategies that have been tested in the FX industry many times.

One of the most popular strategies for them is the 1 minute strategy in FX. The mechanism of this strategy is very simple – traders just close their positions in under one minute instead of waiting for an hour or more. Traders in Zimbabwe effectively use this strategy and make benefits just by three easy steps:

(1) They identify what are trends for the given moment.

(2) After that, they just wait for a pullback to the moving averages. And finally,

(3) they wait for the stochastics indicator to move up and exceed the oversold conditions. This method seems to be very effective for forex traders. However, it’s not the only one and forex trading, in general, has become a good way for Zimbabwean traders to overcome economic problems and raise money. But still, not everybody can get involved in the industry because the internet penetration level in the country is so low, despite some small improvements, and the poverty rate still continues to rise.

Money laundering has always been a common practice in Zimbabwe which is not really surprising, considering the low quality of life of the locals. There are many organizations in the country that try to prevent such kinds of activities but now currency dealers in this country brought a completely new meaning to money laundering as they start to repair old currencies. Therefore, catching money laundering criminals has become a hard task because it’s not really easy to detect activity like repairing old currencies.

Despite the many cases of unofficially refurbishing federal reserve notes and using them in commerce, most of the shops reject repaired dollars. But market traders try hard to negotiate with them and as a result, sometimes they achieve success and make them accept these glue-patched dollar notes.

As Zimbabwean dealers report, this process is not without difficulties and actually, they have some problems while using repaired dollars. In fact, they face problems related to change because most of the time when they buy with these dollars, sellers don’t have enough change. All this shows that the poverty rate in this country is so high that people can’t even afford to provide change for one single dollar.

Another important problem is that people in this country don’t even have faith in their own currency. The main reason why they decided to repair old dollars and start trading using it is that the national currency, the Zimbabwe dollar has so low value that people even refuse to carry them around because they need to carry a lot of them just to buy one single loaf of bread.

Now, this so-called money laundering technique is used by ordinary citizens as well just to buy their daily bread and meet their everyday needs with some small purchases. Since hyperinflation started in this country, USD has been a major currency that dominates transactions. Hyperinflation in 2009 made the government abandon their local currency and switch to the American dollar.

Although in 2019 the government tried to make some changes and reintroduced a Zimbabwe currency, the black market continued to use USDs even when restrictions for using it local transactions were applied. This is why the government decided to move the ban on US dollars. For now, they still say that using USDs is illegal but it’s a fact that many people continue to use them.

The low value of the national currency indicates that the economy of Zimbabwe currently is in front of a big crisis. In fact, Zimbabwe’s economy is so deindustrialized and for the given moment not even a little improvement is expected.

Currently, the manufacturing sector takes a smaller share of GDP and has a very small percentage of the workforce. Other problems that weaken the economy are low investment, low exports, and high unemployment, as well as high debts.

Therefore, the country can’t afford to generate a new flow of fresh dollar notes which is badly needed for the recovery of the economy in Zimbabwe.