President Mnangagwa poses for a picture with SRC president Brendon Machingauta (left) and his vice Misheck Taruvinga at Chinhoyi University of Technology yesterday.

Experts and lay people are both important in nation building and must be considered for the effective implementation of Education 5.0 where innovation is premised on heritage-based solutions.

This was said by President Mnangagwa yesterday at Chinhoyi University of Technology (CUT) after a virtual graduation ceremony.

Speaking after a tour of the CUT Agro-Industrial Park, Germplasm Laboratory and the Innovation Hub, the President used examples of his early life as a lawyer, to highlight the folly of disregarding others on the basis of their present circumstances or material lacks.

“In 1976, I was admitted to the bar of the High Court of Zambia and I was attached to the Dumbutshena Law Firm. I had no car and of course, I had already come from China and prison as a Zanla cadre.

“We used to argue with the former Chief Justice Dumbutshena in his car as we went to the High Court. I was Zanla and he was Frolizi and UANC; he touched my shoulder and said: ‘Young man, our argument cannot finish; the way the world is structured is that some think and others implement. So you are a guerrilla and you will implement. I will think and implement’.”

The President said, years later, when he was the Minister of Justice, he went to his boss, the late former President Mugabe and said: “I think we need black judges on the bench.” 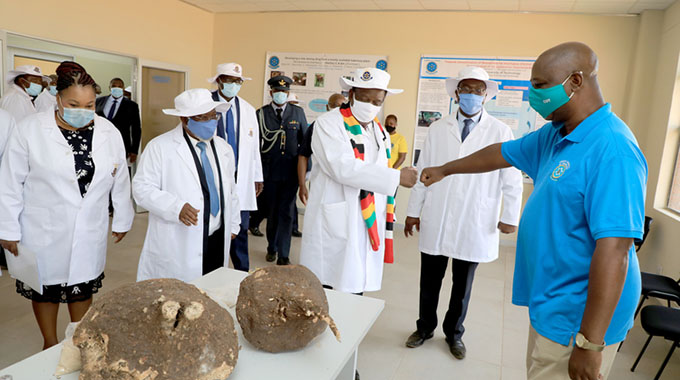 President Mnangagwa is welcomed by Professor Arnold Mashingaidze to the Chinhoyi University of Technology’s Innovation Hub where he was shown a neorautanenia brachypus (Zhombe plant) — a tuberous plant being developed into a drug. Looking on is Higher and Tertiary Education Minister Prof Amon Murwira (second from right), CUT Vice Chancellor Prof David Simbi (second from left) and Minister of State for Mashonaland West Province Mary Mliswa-Chikoka (far left).

“I told him that I had Enoch Dumbutshena in mind which he did not object to. I then called my former legal boss (Dumbutshena) to my office then I said; ‘Mr Dumbutshena, I have discussed with the President (Mugabe) and he is willing to appoint you judge. The idea of you being appointed the judge comes from the practical man to the philosopher,” said President Mnangagwa.

Justice Enoch Dumbutshena who died in 2000, was the first black Zimbabwean Chief Justice.

The President referred to present efforts to build Zimbabwe saying: “We collectively built consensus around our national aspirations of modernising and industrialising our economy, towards the attainment of Vision 2030. Thus my Government declared Education 5.0 as the building block for achieving this objective.

“Since then, we have witnessed the establishment of innovation hubs and construction of industrial parks within the institutions of higher learning.”

The President said the completion of the Germplasm Laboratory, the Business Incubation Hub and the construction of the Agro-Industrial Park demonstrated CUT’s commitment to the national development agenda.

Higher and Tertiary Education, Science, Innovation and Technology Development Minister Professor Amon Murwira said the President’s vision of a heritage-based industrialised economy was aimed at achieving an upper middle class income of at least US$3 500 per head and was possible through Education 5.0.

The 16th graduation ceremony saw 2 292 graduates being capped, although only 56 were physically present at the occasion, among them, Zimbabwe Prisons and Correctional Services incoming Commissioner-General Moses Cyril Ngawaite Chihobvu, who graduated with a Master of Science degree in Strategic Management, showing that age and rank were not an impediment to the quest for knowledge.

Of the total, 45 percent were women, with entrepreneurship and business sciences undergraduates dominating with 1 030 graduates.

Devoid of the usual exuberant family atmosphere because of the restricted attendance, the occasion was however spiced up by Mechanic Manyeruke’s celebratory song “Makorokoto” which blurred from the crystal clear sound system.

The exhilaration that usually comes with celebrating multitudes, especially those young at heart, was subdued by Covid-19 health protocols, which include social distancing and compulsory wearing of face masks.

Nonetheless, those under fortune’s wing were among graduates and their loved ones sheltered from the vagaries of the scorching heat by the tent pitched on a raised platform in the university’s grounds.

The ceremony was surrounded by trees coming into leaf, among them the dominant acacia and the dry grass and red loamy soils that are synonymous with the dry season.

Graduating under this new normal, graduates chronicled experiences of the last six months of their degree programmes.

Some said although it was disheartening to graduate in the absence of their colleagues, who were following proceedings virtually, they had also faced challenges in collecting data for their dissertations because of the Covid-19 lockdown.

Doctor of Philosophy in Marketing degree graduate, Mr Lovemore Chikazhe, said while he finally made it to the podium, Covid-19 transformed ways of learning and research.

“We have to adapt to the new normal and desist from hanging onto the past, pertaining to graduation ceremonies at our institutions, because of the Covid-19 pandemic.

“Today marked a new era since CUT was the first Government institution of higher learning to hold a successful virtual graduation ceremony. However, I must say there had been mixed feelings among the graduates as a lot of students who had to graduate virtually have been disheartened,” he said.