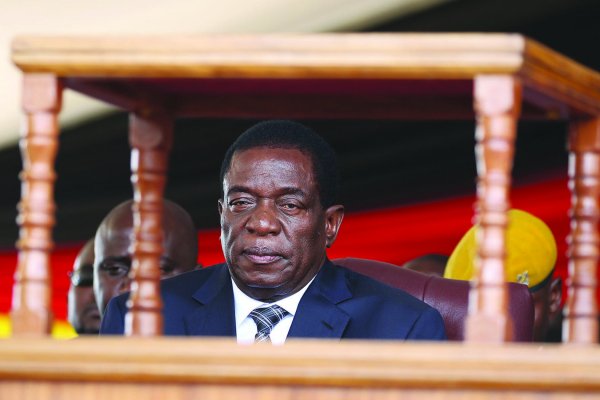 “The deceased were at 64 this morning and the number keeps on increasing and they are now 82, we are looking to bury them as early as possible once we get access into the areas they are. The government is going to assist the deceased’s families with coffins and food, that is our priority,” he said.

The tragedy has since been declared a national disaster.

The Ministry of Information confirmed in a statement that Mnangagwa was expected home earlier than scheduled so that he could oversee rescue operations in Manicaland and Masvingo provinces, where the cyclone has hit most.

Mnangagwa arrived in Abu Dhabi on Saturday for two-day talks with Crown Prince Sheikh Mohammed Bin Zayed Sultan Al Nahyan, according to State media. He was yesterday supposed to visit Dubai, which is about 140km from Abu Dhabi.

“President Mnangagwa has shortened his visit to the UAE to make sure he is directly involved with the national response by way of relief to victims of Cyclone Idai-induced floods. The President has also incorporated in his schedule a plea for assistance for the cyclone victims,” the Information ministry said.

This comes as thousands of people, especially in Chimanimani, Chipinge, Zaka, Bikita and Chiredzi districts were cut off from the rest of the world, with no power, communication, clean water or food as government rescue teams struggled to reach the affected areas because of bad weather.

Moyo and his inter-ministerial team, comprising of Perrance Shiri (Agriculture) and Joel Biggie Matiza (Transport), could not reach Chimanimani after they got stuck at New Year’s Gift after Tanganda, while Public Service minister Sekai Nzenza also failed to get to Tongogara Refugee Camp in Chipinge.

Government officials confirmed to NewsDay yesterday that hundreds of people were still marooned in Chimanimani and Chipinge.

A Zimbabwe Consolidated Diamond Company official said 13 of their workers who escaped from a local lodge were still marooned on a nearby mountain.

He said efforts by an Emergency Medical Rescue Ambulance Service helicopter to rescue marooned villagers hit a brickwall due to bad weather.

“We are doing all processes to clear roads so that we have access to the most affected people. Army is busy clearing the roads as you know Chimanimani is a plantation area. Big wattle trees have fallen onto the roads. We want to reach Ngangu and Charles Luwanga School, where students are still trapped,” he said.

Two pupils from the school died on Friday after their dormitory was crushed by mudslides following heavy rains. The other 175 pupils were still stranded at the school.

Cyclone Idai hit the borderline areas of Zimbabwe on Friday afternoon from the Mozambique Channel, leaving a trail of destruction in its wake, with some families, especially in Manicaland province, seeking refuge in the mountains after their homes were swept away by floods while bridges were washed away, making rescue efforts extremely difficult.

Chimanimani resident Mariam Chikomba, who crossed the Rusitu River before the floods hit, said most homes and cars had been swept, amid fears that some victims could have been buried under mudslides.

Japhet Muvhulo said he had learnt that the Roman Catholic bishop from Rusitu Church was trapped in the mountains.

“The bishop from Rutsitu church is fine, but as we speak, he is in the mountains, his car was swept by the rains, nobody has access to the village,” he said.

Government said its rescue efforts were being hampered by bad weather as Air Force of Zimbabwe helicopters could not manoeuvre to rescue those trapped on islands, while most roads were impassable.

“The army is moving in from Chipinge to rescue 197 pupils from Charles Luwanga, so they can take them to Mhandarume. This is a very challenging operation as it is being undertaken as a ground effort because of unsafe weather conditions for air efforts,” the Information ministry said.

Thousands are feared injured and homeless in Chipinge, Chimanimani districts and Masvingo’s Zaka and Bikita districts.

Chipinge was cut off the power grid and the whole town plunged into darkness and without access to clean water since Friday as strong winds uprooted pylons.

The trail of destruction in the suburbs is huge after most houses were destroyed, especially in Gazza O surburb.

Due to the blackout, mortuaries in Chimanimani have been hit hard, raising fears of another catastrophe.

In Masvingo, three children died after their house gave in on Friday night, according to the provincial CPU head and provincial administrator, Fungai Mbetsa, while the roof at Mutimurefu Prison was blown off, leaving the prisoners exposed to the rains.

“The rains are still pouring, but the strong winds have subsidised. The number of those injured is yet to be verified, but bridges like Mujiche is impassable.
We are still gathering more information,” he said.

In Chikomba district, Mashonaland East, an 83-year-old man died after he was swept by a flooded river following the cyclone-induced heavy rains that have been pouring in the area for the past two days.

The floods have also resulted in the destruction of 20 houses in Masasa area in Chikomba’s ward 17, according to acting provincial administrator, Clemence Masawi.