Hundreds of residents of Diamond Park, an illegal development in Melfort between Harare and Marondera that the courts ordered vacated six months ago, saw their houses demolished by Goromonzi Rural District Council this week as local authorities across the country intensifying the demolition of illegal structures that can never be regularised.

While houses built on stands in properly planned and approved suburbs are being regularised if the main problem is no servicing by developers, those built on wetlands, public open spaces and other areas where building is banned have to go.

Melfort is close enough to Harare and Ruwa to allow some commuters to and fro, so there was a market for the expensive stands that had been created without approval of the council.

The developer and residents of Diamond Park were subject of a court order six months ago to vacate the area, but ignored it.

The developer, Eastwinds Properties, knew the settlement was illegal two years ago, and was ordered almost a year ago by Government to stop selling stands, and then the developer and the land  buyers were ordered by the courts near the end of last year to vacate the area.

The Ministry of National Housing and Social Amenities said in a statement that the developer had ignored court orders and other efforts to stop the development.

“The Melfort land in question was occupied by a company called Eastwinds Properties represented by Rodger Pote in 2018,” said the ministry. “In an attempt to develop the land, the company parcelled out pieces of land at a premium whilst not providing the requisite offsite and onsite infrastructure.

“On December 1 2019, the then Zanu PF chairman of Mashonaland East and Minister of Transport, the late Hon Joe Biggie Matiza, called for a Melfort stakeholder’s meeting to find a lasting solution for the illegal settlement.

“In that meeting, the Ministry of National Housing and Social Amenities was requested to include Melfort in its regularisation agenda. This decision was arrived at based on the understanding that the developer was a holder of a genuine and legitimate offer letter or Development Permit from Government.

The ministry then wrote to Eastwinds Properties on September 22 last year instructing the firm to immediately stop selling any further land to home-seekers and to discontinue all developments until all legal matters were resolved.

“The legal matters between the two parties have since been settled and a judgement was handed down by the Goromonzi Magistrates Court on 4 December 2020,” said the ministry. “The court ordered that the defendants and all those claiming rights of occupation of stands at or within Melfort township, Goromonzi, be forthwith ejected from the stands.

“The plaintiff (the council) or the Messenger of Court, and if necessary with the assistance of the Zimbabwe Republic Police, are authorised to demolish all illegal structures built by the defendants and all those claiming rights of occupation through them at within Melfort township, Goromonzi, and the defendants shall jointly and severally pay the costs of the legal action on an attorney and client scale.”

But residents of Diamond Park are still bitter although they had ignored the court order.

After the demolitions, beds, wardrobes and groceries were left in the open and people were worried about where they could sleep in the cold weather.

One resident whose house was demolished said she was enduring the cold weather with her two month-old baby.

“I have a two month-old baby and now I am scared that he can be severely affected by this cold weather. I have nowhere to go. As you can see, all my belongings are in the open. I just pray that it won’t rain anytime soon.”

Another home owner, a 65-year-old man, said his hopes were pinned on the residential stand he bought from a land baron thinking that his dreams and prayers had been answered.

“I had never possessed a personal house before,” he said. “I was so sure my prayers had been answered, but now I am no longer sure. The council left everyone here building nice houses, yet they knew they were coming to destroy them. 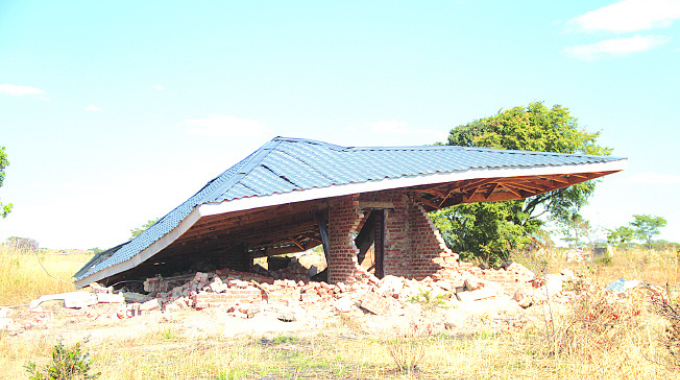 But residents of Diamond Park are still bitter although they had ignored the court order.

“We invested a lot of money and time for nothing. I am now appealing to the Government to assist us and restore order here. We want our stands back.”

Another youthful resident said: “I was happy to have bought a residential stand here. I am not formally employed and I earn my living through toiling day in and day out. After saving my hard earned cash, I decided to build a structure here, only to wake up one day to see it reduced to rubble.

“I am not only disappointed with this exercise; I am actually hurt. How can we progress as youths when what we work for is destroyed in a split of a second?”

Mr Pote is still trying to claim he was in the clear.

He said he followed all the procedures required, hence his clients developed their stands.

Although the court order was explicit, he still claimed he did not know why the council acted the way it did..

“We are not sure why the council demolished these structures,” said Mr Pote. “We did everything that we were asked to do. We are now engaging with the authorities to map the way forward.”

Mr Pote plans a meeting today in Melfort with those who bought the illegal stands.