Desperate Zimbabweans use cell phone transfers to get cash 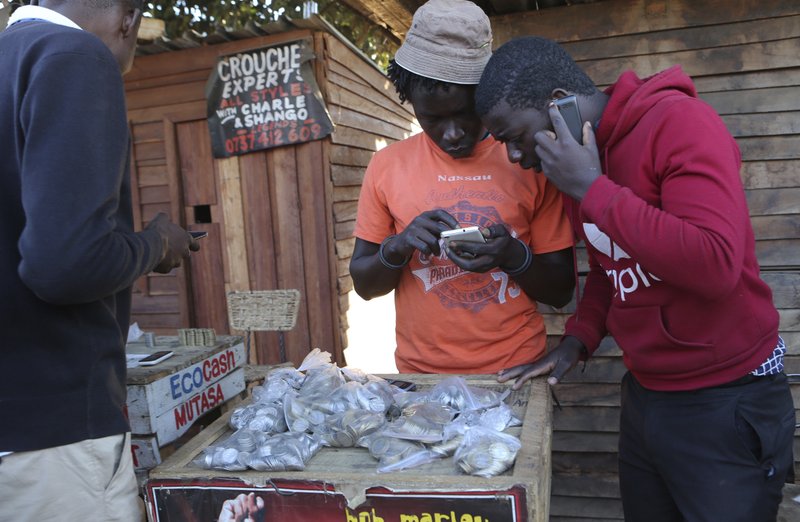 In this photo taken Thursday, Aug. 8, 2019, vendors are seen on their mobile phones while selling cash in Harare, Zimbabwe. With inflation soaring and cash in short supply, many Zimbabweans transfer funds using their mobile phones and pay a premium to get currency. (AP Photo/Tsvangirayi Mukwazhi)

HARARE, Zimbabwe (AP) — After protests brought Zimbabwe’s capital to a standstill earlier this month, Harare has returned to its normal bustle and Tedius Marara is back to his daily business: selling cash at a busy market.

With inflation soaring and cash in short supply, many Zimbabweans transfer funds using their mobile phones and pay a premium to get currency. Marara is one of many cash vendors doing a roaring trade.

People huddle around his wooden stall, one eye on their mobile phone screens and another on a small counter brimming with coins.

“These are my banks nowadays,” said Mishy Tshuma, a customer referring to her mobile phone and the makeshift stall. To get cash, she has to pay Marara on a transfer by her phone and pay a hefty premium.

And in a country where cash is king, she has little choice but to pay the extra amount.

Like many things that are in short supply in Zimbabwe, such as electricity, water and gas, cash is scarce and the country’s economic problems are blamed for rising tensions.

The shortage of currency notes and coins shouldn’t be much of a problem in a country ranked by a World Bank 2018 report as having one of the highest numbers of people in sub-Saharan Africa using cell phone transfers, what is called mobile money. More than 80% of all transactions in the country are conducted through mobile money, according to the Reserve Bank of Zimbabwe, the country’s central bank.

The World Bank says increased use of mobile money is a welcome sign of a greater proportion of the population engaged in the banking sector. Yet, in Zimbabwe it is more a matter of the difficulty and the cost for ordinary folk of getting ready access to cash.

Many retailers and service providers demand payments in cash only. Others, including street vendors, charge a higher price for goods paid for using mobile money or bank cards. Those able to pay in cash get sizeable discounts of up to 50%.

With many factories closed or operating only for a few hours due to widespread power cuts that last up to 19 hours a day, Zimbabwe imports most of its goods. Businesses need cash to buy foreign currency from the illegal black market to restock, said Harare-based economist John Robertson.

Many Zimbabweans travel by bus or freight trucks to neighboring South Africa to buy essential items such as cooking oil, rice, toilet paper and toothpaste and they need cash to buy South African rand on the black market.

“Cash will continue to have a much higher value than money sitting in the bank,” said Robertson.

The frantic hunt for cash often turns into begging. At the long lines to buy gasoline or diesel and in supermarkets, women, men and children move from person to person asking for cash. “Can I use my phone to pay for your goods, if you pay me cash?” they plead.

Enterprising people are cashing in on the shortage to sell cash at a premium to desperate people.

Some people still wait in long lines outside their banks in the faint hope of being allowed to withdraw a bit of cash. But many have long given up because banks are usually unable to dispense cash, even to their own account holders.

Cash vendors become their only option, despite the steep fees that they charge.

“Paying extra to cash out is allowing someone to steal your money. Say no to 30% or 40% extra,” says an advertisement by Econet, a telecommunication firm that handles the bulk of the country’s mobile money transactions.

Cash vendors said they are recording booming business in spite of such warnings by telecoms firms and the police.

“It’s not easy getting this cash. I also fork out money to get it so my customers have to pay more if I am to make any profit,” said Marara, between serving a stream of clients at a busy market. He said he can sell up to 2,000 Zimbabwe dollars (about U.S $200) for a 40% profit on a good day. He buys the cash from public transport taxis operators, fruit vendors and supermarkets.

The cash shortages are just one of many problems facing the once-prosperous country, where inflation peaked at a decade high of 175% last month before the finance minister suspended the country’s inflation reports.

The continuing price increases of gas, school fees, food items and government services mean Zimbabwe “will still have a high rate of inflation” even if it is not announced officially, said economist Robertson.

“It is puzzling that the finance minister can suspend publication of inflation statistics, is it adult viewing?” joked Robertson. “I reckon inflation was way above 200% in July and it’s on its way to 300%,” he said.

For many, such as Harare resident Tshuma, who lose a large part of their wages to cash vendors, they are learning to do with less.

“These (cash) vendors are killing us,” she said. “After paying for the cash we can’t buy what we need because we can’t afford it.”