Herald Reporters
The toxicity levels in Lake Chivero have reached alarming levels, twice the stipulated minimum, with Harare City Council spending US$3 million monthly on a cocktail of water treatment chemicals to remove these but which in themselves pose cancer risks to residents.

Even after treatment, Harare water falls short of World Health Organisation (WHO) standards which stipulate that water for consumption should be odourless and colourless.

The MDC-led council’s product is turgid and smelly.

It has also emerged that over the years, Harare has failed to implement recommendations to stop the deterioration of its water quality.

By contrast, according to an insider with knowledge on running affairs of the city, Bulawayo  decommissioned its Khami Dam facility when it reached similar toxicity levels seven years ago.

WHO says the optimum pH (acidity level) varies in different supplies according to the composition of the water and the nature of construction materials used in the distribution system, but is often in the range 6,5 to 9,5.

Most industries have no pre-treatment plants and are draining toxic products, poisons, non-biodegradable substances and organic matter into the environment.

A recent study by City of Harare and EMA revealed that the main contaminants are sulphuric acid, caustic soda, ammonium salts, phosphates and sulphates among other organic substances. Additionally, the city pumps raw sewage into its main water source, Lake Chivero.

Asked what Harare was doing since it was disposing of raw sewerage in water sources, Mayor Herbert Gomba said: “We were supposed to rehabilitate our sewer works under the $144 million loan, but since we are still to get the remaining funds we currently considering alternative models like selling off our debts to banks so that we can attend to our dilapidated sewerage infrastructure.”

Water levels at Lake Chivero have also reduced by 10 metres from 28 metres deep due to siltation caused by urban agriculture, while algae has been clogging filters and affecting clarifiers. 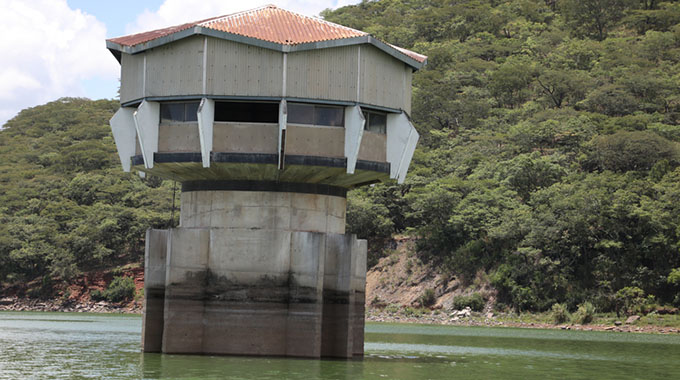 The water intake tower in the lake. — (Picture by Justin Mutenda)

Among other causes of the major pollution are stream-bank cultivation, effluent from industries and sewer bursts.

Harare is experiencing its worst water problems in years owing to low rainfall and the shortage of water chemicals.

Lake Chivero is downstream of the capital, while Chitungwiza is within the Upper Manyame Sub-Catchment Area such that most sewers discharge from Harare and Chitungwiza end up in the water sources.

The major settlements that have contributed to the pollution include Harare and the dormitory towns of Chitungwiza, Ruwa and Epworth.

The areas are densely populated and are prone to sewer bursts.

Mayor Gomba said the pollution has been caused by various factors, chief among them Harare’s disposal of untreated and raw sewage into Lake Chivero and urban agriculture.

“Fertilizers which are being applied by urban farmers are finding their way into the water source. The other cause being numerous constructions on wet lands and again the fact that EMA and Upper Manyame Catchment Area and City of Harare have not been working together to make sure that we prevent pollution of the streams that feed in to the water source,” he said.

“We have raised these issues with EMA. They promised that we will do a joint operation to make sure that we arrest that. Again as City of Harare we are looking at coming up with a policy to control urban agriculture because it has numerous consequences. We are looking at how best we can work with national parks to secure the facility, Chivero as a water source.”

He said council will engage its satellite towns to ensure that no raw sewerage is disposed into water bodies adding that Harare itself will also seek partners to rehabilitate its own sewerage treatment works.

WHO guidelines say water for human consumption should be free from chemical contamination. A heavy load for nitrates in water has been known to cause the blue baby syndrome in which young babies turn blue due to lack of oxygen.

Water that is heavily loaded by organic chemicals is also a fertile breeding ground for bacteriological contamination.

Bacteriological contamination of water needs the techniques of a specialist to detect in the form of bacteriological family known as Coli and Ecoli.

A recent study carried out at the University of Zimbabwe, Department of Animal Science, and University Lake Kariba Research Station titled, “A Comparative Evaluation of Carcass Quality, Nutritional Value, and Consumer Preference of Oreochromis niloticus from Two Impoundments with Different Pollution Levels in Zimbabwe” sampled fish from Lake Chivero and Lake Kariba.

Raw fish from Lake Kariba were significantly firmer, are less green and redder, had a stronger typical fish odour, and were more acceptable than Lake Chivero fish.

Lake Chivero fish had a stronger foreign fish odour than their counterparts.

Former Harare Mayor Bernard Manyenyeni during his tenure admitted that the water pumped by the city into residents’ homes may not be safe for human consumption, and advised consumers to exercise caution until such a time that total quality was assured.

The Environmental Management Agency which is the regulator for raw water could not be reached for comment as spokesperson Mrs Amkela Sidanke promised to get back to The Herald but had not done so by time of going to print.