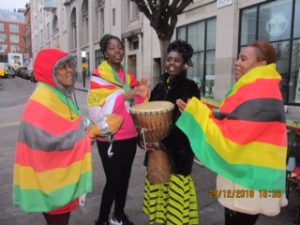 A Vigil supporter who works for the needy in Zimbabwe says her job is becoming increasingly difficult. She sent us the following message from a desperate doctor.

‘I have tried my best not to do this; ranting about my job in the public domain and writing about my personal struggle but I have since discovered that the hymen has already been breached. I have come across quite a number of posts (mostly lengthy in keeping with the severity of the situation) by doctors lampooning the government over it’s inadequacies, arrogance and irrefutable disregard for the welfare of its citizens. In short I have reached breaking point, I simply cannot go on.

‘Every single day I dedicate every second fighting against death; both my own (from exhaustion or work-related hazards) and my patients. The government has now repeatedly raped me into submission. The ridiculous court challenge and sanction was the last straw, the final penetration.

‘I have lost countless patients because of lack of resources required to save them. For example, when a road traffic accident occurs all casualties are rushed to the nearest hospital for ‘treatment’. I happen to work at a hospital situated along a major highway so such cases are not far from the norm on any given day. When they come in all we are able to do is measure their blood pressure, pulse rate and temperature. That’s it! Nothing else!! There are no drugs to manage the pain, no plaster casts to manage the fractures, no functional X-ray machine, no suture material to stitch up the patient, no chest drains to save the lungs, no corsets or neck collars to stabilize spinal cord injuries, nothing nothing nothing. So why then should I even bother going to work? To do what? Just to watch people die and getting blamed by angry relatives?

‘I can go on and on giving details of how gory our working conditions are but I’m sure most people have already stopped reading this. I know for a fact that at this very moment in time a sizeable portion of my colleagues are already suffering from one mental health problem or the other induced by the gross ill-treatment the government has so callously dished out to us. At some point we were bound to reach breaking point. Most of us have. It is better for us to just stop going to work altogether than to attend to patients in this frame of mind. An unstable doctor is far much worse than an absent doctor. Returning to work as things stand is NOT AN OPTION. They can keep their lousy salary and I will keep my sanity and dignity.’

Zimbabweans were, of course, not the only people to have endured a miserable Christmas. But the country which mirrors the plight of Zimbabweans best is oil-rich Venezuela. Only a decade or so ago it was one of the richest countries in South America. Its decline, driven by ideology and corruption, has been spectacular.

Its current situation will ring a bell with Zimbabweans: inflation exceeds 1,000,000%, public services have collapsed, running water is a luxury. The minimum wage is about $7 a month and apparently this is what doctors and teachers get. One in ten Venezuelans have fled the country since 2015.

The rulers of both countries share the same quasi-Marxist pretensions and the elite in Venezuela would be easily recognized in Zimbabwe. Often driving late model cars with no number plates, they are the untouchables, dining in expensive restaurants and shopping in ‘dollar stores’ – no doubt, like the Mugabe children washing their expensive watches in champagne.

The London Times reports that last month, during court testimony in Miami, there was a glimpse of how much wealth had been pillaged from the country: ‘Alejandro Andrade, who in 2007-11 served as national treasurer to President Maduro’s predecessor Hugo Chávez, admitted receiving $1 billion in bribes for selling access to the government’s controlled exchange rate, whereby dollars can be bought for a fraction of their real value. Andrade, who started his career as Mr Chávez’s bodyguard, had developed a weakness for property, showjumping horses and luxury cars in Florida. “I made some very bad choices when I was treasurer,” he told the court.’

We’ve been there. Done that. What next? The Vigil wishes people at home a better 2019 (and our suffering brothers in Venezuela too).

FOR THE RECORD: 12 signed the register.