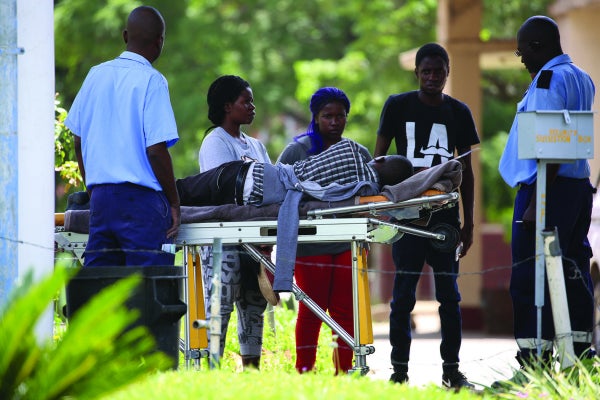 Doctors are being forced to watch their patients die from avoidable conditions as fundamentals for safe provision of healthcare are not in place.

In a shocking revelation, senior doctors said they were working in dysfunctional hospitals, where patients were dying because of lack of appropriate equipment, overcrowding and unhygienic conditions.

They said these reasons, among others, were the causes for their incapacitation.

“The fundamentals for safe provision of healthcare are not in place. Doctors at all levels are being made to watch patients die. The often-mentioned Hippocratic Oath states that doctors ought to never give dangerous services, ‘first do no harm’,” the doctors said.

Speaking through their representative body, the Senior Hospital Doctors Association (SHDA), they said the worst affected were the maternal and surgical units at central hospitals.

“Harare Hospital neonatal unit (NNU), for instance, has inadequate numbers of incubators, erratic heating, no oxygen blenders, not enough equipment to monitor babies. The unit is also overcrowded and unhygienic. There is also no working ventilator at the Harare Hospital NNU and the sister unit at Parirenyatwa is overcrowded,” the doctors said.

The Harare Central Hospital maternity unit is one of the busiest referral centres in the country and receives some of the most complicated cases.

In a candid statement, the doctors said this environment was emotionally draining for them as well as the other staff working in those departments.

Of concern also for the doctors is the lack of theatres, especially for Caesarean sections.

Having only one functional theatre means there are inevitable delays in performing Caesarean sections timeously to deserving mothers, resulting in delivery of avoidable brain damaged babies, neonatal deaths and endangering lives of mothers.

On surgical services, they said major and essential medical equipment was either unavailable, broken down or obsolete, hence requiring urgent replacement.

The lifespan of procured equipment is often reduced due to lack of service contracts.

“Specialist doctors have all along struggled to continue offering quality service under these conditions. We acknowledge the initiative by the Ministry of Health to procure some equipment, but the impact has been negligible. The majority of equipment acquired is not in use either due to missing components, such as the neonatal ventilators, or is unusable such as the anaesthetic machines, which are completely incompatible with our system. The rest remains boxed and awaiting commissioning by the authorities,” the doctors said.

Another cause for concern was the erratic water supply in theatres and inadequate supply of cleaning and disinfectant materials, making preparation for surgery unsafe.

Cancer units have also been affected, with persistent shortages of basic oncology drugs for both children and adults.

The radiotherapy machines are frequently broken down and can take up to four months to be repaired.

This is against a background of an increasing burden of cancer in Zimbabwe.

The doctors are also riled by the fact that at some occasions, they have been forced to perform emergency procedures, deliveries and resuscitations without protective clothing.

“We are aware that these problems are affecting other hospitals outside of Harare and Bulawayo to varying degrees,” they said.

The doctors, however, said they were ready to negotiate to resolve the current crisis and find a lasting solution to the deteriorating standards in the public health sector.