Doctors in Zimbabwe have said the health system is overwhelmed and could collapse as the country battles a new wave of infections that has prompted a strict new 30-day lockdown. 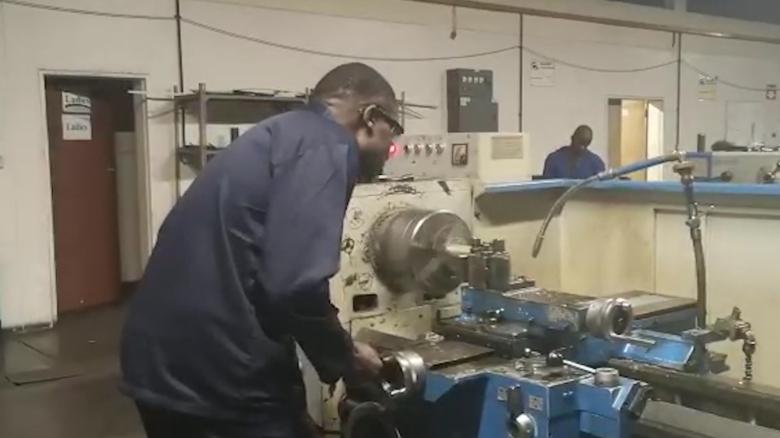 See how people are making ventilators from scrap material 08:33

Harare, Zimbabwe (CNN)Doctors in Zimbabwe have said the health system is overwhelmed and could collapse as the country battles a new wave of infections that has prompted a strict new 30-day lockdown.

After the Christmas holidays, Zimbabwe recorded an increase in Covid-19 infections and deaths, raising fears for an already fragile healthcare system.
The government has urged citizens to adhere to the lockdown, which includes movement restrictions to all but the most essential services.
The reopening of schools has been postponed indefinitely, following a Covid-19 outbreak in schools last term, while shops will only be open until 3 pm daily.
A dusk-to-dawn curfew is also in place to avoid night gatherings and events.
The hosts of a New Year’s Eve dancehall concert who flouted an earlier ban on gatherings of more than 100 people were jailed by Zimbabwean court on Monday for six months.
The party attracted thousands of unmasked revelers in the country’s oldest township, Mbare.
On Tuesday, Zimbabwe recorded 1365 new cases and 34 deaths, according to the Ministry of Health daily updates. As of January 5, Zimbabwe had recorded 17 194 cases and 418 deaths, according to the ministry but there are concerns that the number of cases could be significantly higher due to poor testing.
The Zimbabwean Association of Doctors for Human Rights (ZADHR) says the country’s hospitals are unable to deal with an increased demand for admissions in a new report released Wednesday.
“ZADHR notes with concern the limited capacity of local health facilities to accommodate cases that need treatment. The continued surge in new infections has caused the hospitals to be overwhelmed and fail to cater for the increased number of COVID-19 related hospital admissions,” the body said.
The organization is also concerned about a spike in infections among frontline workers. Nearly 1000 frontline workers have been infected by Covid-19 in Zimbabwe due to lack of personal protective equipment (PPE), the doctors say.
“Our conservative estimates point towards over 1000 health workers being infected with COVID-19.
Medical associations have continued to highlight the worrying trends of health workers working without adequate PPE,” ZADHR said.
The doctors also raised the alarm over limited capacity to deal with critical patients in need of intensive care, while admission beds remain low.
“ZADHR condemns in the strongest terms possible the sad situation of continued limited ICU capacity almost ten months after the detection of the 1st COVID-19 case,” the doctors said.
However, Zimbabwe’s Secretary of Information, Nick Mangwana told CNN that the government is “on top of the situation.”
“Right now, our capacity is not stretched. We are however dealing with a fluid situation where if a frontline worker tests positive, it affects capacity.”
“The reason why I said this thing could overrun us is because people were not complying with lockdown rules, so we saw the storm coming,” Mangwana said.
Last year Zimbabwean doctors took the government to court over failure to provide PPE and other safety equipment.
Zimbabwe’s health system has been facing headwinds owing to lack of funding, with health workers at loggerheads with the government over poor, and often unpaid, salaries.

Last year billionaire, Strive Masiyiwa intervened to get doctors back to work following months of horse-trading with the authorities.