Drama as Biti flees to Zambia 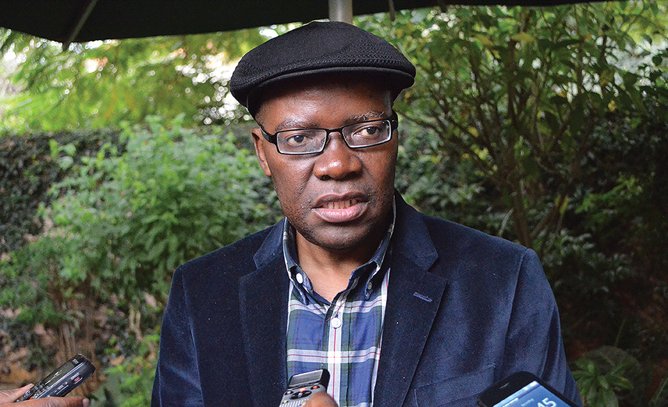 THERE was drama at Chirundu Border Post yesterday when Zimbabwean security agents manhandled MDC Alliance co-principal Tendai Biti as they sought to arrest him on the Zambian side.

The opposition politician, however, reportedly caused a scene when he screamed, claiming that he was being abducted, attracting the attention of hundreds of Zimbabwean travellers’ en-route to Lusaka, who intervened and helped him escape.

Biti’s lawyer, Nqobizitha Mlilo confirmed the fracas at the border.

“We don’t know yet the basis of the detention, but he was applying for political asylum in Zambia,” Mlilo said earlier when Biti was briefly detained before being allowed to go.
The MDC Alliance said Zimbabwean officials had no basis to arrest Biti.

“He was at the border and they tried to arrest him on the Zambian side. It failed because the Zambian authorities and people thwarted the arrest. He is seeking asylum and, at the moment, he is on his way to Lusaka,” an official, who requested anonymity fearing reprisals, said.

Biti is wanted by the police on allegations of unlawfully announcing results of the July 30 harmonised elections and is also accused of public violence following last week’s violent protests against the Zimbabwe Electoral Commission (Zec), which was quashed by the military in a bloody crackdown.

National police spokesperson Senior Assistant Commissioner Charity Charamba said she was still to get information on what transpired.

However, a leaked police memo gleaned by NewsDay said the Zambian authorities refused to release Biti and his team to their Zimbabwean counterparts. The memo read: “Upon arrival at the border, which is geographically located across the Zambezi River on the Zambian soil, the wanted person then gave a Zambian agent their passports, who avoided Zimbabwe immigration formalities and presented the passports to Zambian immigration officials,” the memo read.

“Members of Criminal Investigation Department Chirundu, who were manning the vehicle clearance desk on the Zambian side, were also notified about the issue. The team then sought reinforcement from the station.”

The police memo added: “The information was reacted upon by police officers and President’s Office [operatives]. The accused person and his associates were approached and he strongly resisted arrest, arguing that he was protected by international law since he had already crossed the Zambezi River and was in the process of applying for asylum.”

Following commotion at the border, it is alleged Zimbabwean travellers going to Zambia numbering about 300 people joined in the melee until the security details were overpowered.

The Zambian authorities reportedly refused to entertain their Zimbabwean counterparts, allowing Biti managed to proceed with his journey.

However, reports from Zambia indicate that Biti was denied asylum in Lusaka amid fears that the government could deport him to Zimbabwe.

Social media was yesterday awash with pictures and video footage of a subdued Biti. According to sources, Biti and five other opposition leaders are seeking urgent intervention of the United Nations Human Rights Commission.

Human Rights Watch (HRW) yesterday warned of a repeat of the 2008 post-election violence.

“The rapidly deteriorating human rights situation in Zimbabwe is a repeat of the 2008 violence all over again,” HRW Southern Africa director Dewa Mavhinga said.

“And the government has buried its head in the sand and refuses to acknowledge the reality or to hold perpetrators to account. A blanket of fear now covers Zimbabwe while leaders continue to preach a false new dispensation,” he added.