Economy teeters on the brink of recession 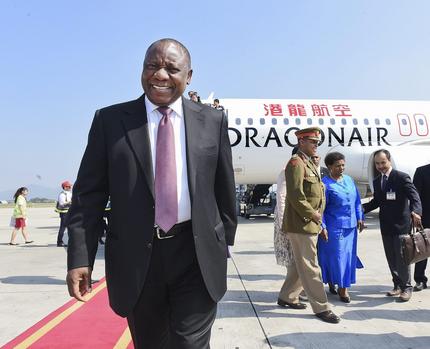 In spite of President Cyril Ramaphosa’s attempts to revive the country’s struggling economy, there is a strong possibility it may slip into recession.

Source: Economy teeters on the brink of recession | Weekend Argus

In spite of President Cyril Ramaphosa’s attempts to revive the country’s struggling economy, there is a strong possibility it may slip into recession. Economists have predicted negative growth for the second quarter (April to June), which would throw the country into recession.

The rand fell to its worst level against the dollar in nearly 18 months this week before it recovered to to R14.04 on Friday.

Poor performance in the manufacturing, agriculture and mining sectors has been cited as a warning sign.

Data from Statistics South Africa showed that manufacturing output growth was 0.7% year-on-year in June. Worried eyes are now focused on the performance of the mining sector’s results, to be released on Tuesday.

Enoch Godongwana, chairperson of the ANC’s economic transformation committee, said they were concerned about the prospect of the country falling into recession.

He said one of the issues discussed during the party’s recent lekgotla was a stimulus package which would kickstart economic growth and avert future threats of recession.

A recession happens when a country registers negative growth for successive quarters. In the first quarter the economy slumped by 2.2%, its worst performance in nine years.

In June last year, Stats SA announced that South Africa was in a technical recession for the first time since 2009. This was after the country’s economy contracted by 0.7% in the first quarter of 2017 after shrinking by 0.3% in the fourth quarter of 2016. Then-president Jacob Zuma was heavily criticised.

Efficient Group economist Dawie Roodt said whatever the results of the quarter would be, “the fact is that the country has always been in recession because people are getting poorer and poorer”.

Roodt said Ramaphosa had inherited an ailing economy from his predecessor, but so far he had failed to pull the economy back from possible disaster.

He also said the ANC’s policy on land redistribuition had dented the country’s image and was also a trigger for the sluggish economic growth.

Ramaphosa recently told South Africans that the ANC supported the amendment of section 25 of the constitution to allow for expropriation of land without compensation.

“Crucial to lifting confidence, attracting investment and boosting economic growth is removing remaining uncertainties surrounding key issues, with land expropriation without compensation and the eradication of corruption and state capture was key to this,” she said.

In April, Ramaphosa announced that he would host an investment summit later this year which he aimed to use in his bid to raise R1.2 trillion over the next five years.

The EFF secretary-general, Godrich Gardee, shot down Roodt’s views on the thorny issue of land.

“When the apartheid government was stealing people’s land the so-called analysts did not say a word about the effects that had on the economy. Likewise, they must keep quiet. We are not going to backtrack on the issue of land. We want it to be returned our people so that their dignity can be restored,” said Gardee.

The EFF has been riding high on the wave of calls expropriation of land without compensation, which is the first of its seven cardinal pillars.

Gardee said he would not be stunned if the country fell into recession, citing what he called weak leadership by Ramaphosa.

“The so-called ‘Ramaphosa’s New Dawn’ has not worked, in fact, it has made things worse. I would not be surprised if we fell into recession. He has dismally failed to lead the country. He is scared of taking tough decisions,” he said.

Meanwhile the National Treasury has set up a panel to investigate the exclusion of more products from VAT.

The panel recommended that consumer products such as white bread, white flour, cake flour and sanitary products all be zero-rated in a move that could cost the state R4 billion in lost taxes.