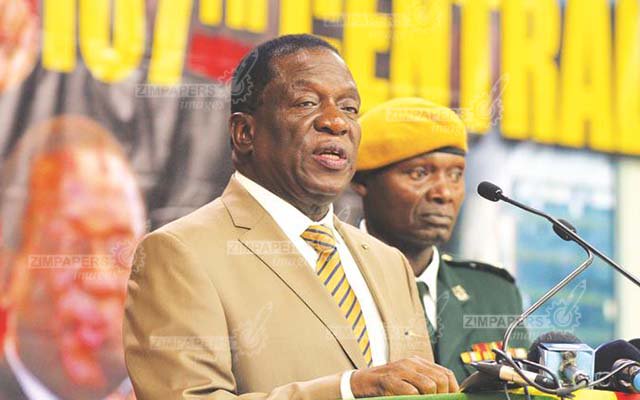 HARARE – Zimbabwe’s main opposition party along with rights groups have
accused President Emmerson Mnangagwa of bribing chiefs with cars in
exchange for votes. 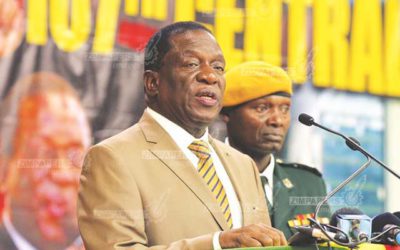 This comes after Mnangagwa splurged a fortune on 52 brand new double cab
cars for traditional leaders, in a move that has been roundly condemned as
“sickening vote-buying” by Zanu PF ahead of the watershed polls – and not
withstanding other more urgent needs.

Mnangagwa and his deputy, Constantino Chiwenga, handed over the cars in
Gweru on Saturday after meeting with 286 traditional chiefs.

He said the rest of the cars were on their way.

Rights groups and the opposition allege that in return of the privileges,
the chiefs are expected to render unconditional support for Mnangagwa and
his lieutenants in Zanu PF and act as agents of the electoral
authoritarian ruling regime in the do-or-die 2018 general polls.

Mnangagwa, who ascended to power last November in a military coup that
toppled veteran ruler Robert Mugabe, faces a tough challenge in the
presidential vote being held alongside parliamentary and municipal ballots
around mid this year.

The main opposition MDC said traditional leaders were obliged to be
non-political actors by the supreme law of the land.

“Of course, . . . Mnangagwa is smelling a humiliating defeat at the hands
of the MDC in the forthcoming elections; thus, he is desperately trying to
garner support from the country’s traditional leaders to enable them to
virtually coerce their subjects to vote for Zanu PF,” MDC spokesperson
Obert Gutu told the Daily News.

“However, this strategy will not work because the majority of the chiefs
and other traditional leaders are very smart people. They don’t want to be
used as Zanu PF’s political commissars.

“The time of the hand-over of the motor vehicles to chiefs is obviously
meant to compromise them and make them willing tools of the Zanu PF
regime. This will not work because the chiefs know that the Zanu PF
regime, even under . . . Mugabe, was never genuinely interested in looking
after their welfare.”

Stephen Chan, a professor of world politics at the School of Oriental and
African Studies at the University of London in the United Kingdom, said as
far as he can see, Mnangagwa has continued a practice borrowed from the
Mugabe era.

“I disagree with it but it is, unfortunately, a common political
phenomenon in many parts of Africa,” opined Chan.

Gladys Hlatywayo, a political analyst and civil rights campaigner, said it
was sad that the Mnangagwa administration was demonstrating each day that
it is not different from the previous regime.

“They continue to use the same tactics and strategies and, personally, I
struggle to see the so-called `new dispensation’. It is a case of
misplaced priorities given the state of the economy,” she said.

Zimbabwe’s economy is deep in the throes of a debilitating economic
crisis, which has led to horrendous company closures and the consequent
loss of hundreds of thousands of jobs.

Life has therefore become more and more unbearable for millions of
long-suffering Zimbabweans, as the local economy continues to die amid a
severe shortage of cash.

Hlatywayo said the timing of Mnangagwa’s benevolence points to the motive.

“Like the previous administration, this administration seeks to use
traditional leaders to mobilise on its behalf ahead of upcoming
elections,” she said.

The Mugabe regime was known for valorising the traditional leadership
institution, showering them with gifts such as vehicles, farms, farm
machinery, generators, houses, mobile phones, fuel and electricity, and
effectively making them agents of coercion, contrary to their much-vaunted
role as custodians of national culture and traditional values.

Dewa Mavhinga, head of the Human Rights Watch Southern Africa, said there
was no difference between Mnangagwa and Mugabe when it comes to Zanu PF’s
relationship with chiefs.

“The timing of the car gifts to chiefs ahead of elections could point to
inducements for chiefs to support and campaign for Zanu PF in violation of
the Constitution which requires chiefs to be strictly non-partisan. It
points to misplaced priorities when hospitals lack basic medicines and
equipment,” he said.

Analyst Tamuka Charles Chirimambowa said each car can buy four tractors
and with 230 cars, you have close to a 1 000 tractors that could have
boosted farmers.

“The buying of cars is consumption economics and if he would have bought
something like tractors, that’s production economics,” he said.

Analyst Xwayani Hope Msipha said the dishing out of cars to chiefs was a
clear political move done by a party conscious of the need to seal the
rural areas from the opposition.

Mugabe built a massive wall of fear for the rural people – who constitute
75 percent of the Zimbabwean voter bloc – maintaining control over the
rural vote by directing ordinary voters to give their ballot-paper serial
numbers to their village headmen, who would have marshalled the voters to
the polling station and made them queue in a predetermined order,
blatantly violating the sanctity of the vote.

Intimidated villagers willingly voted for Zanu PF, and those who disobeyed
this instruction were ruthlessly punished – commanded to sprawl on the
ground, sometimes naked, then clobbered on the back, buttocks, the head,
while some had their homes burnt or knocked down or told never to return
to their villagers by Zanu PF youths – pumped up with beer or marijuana.

Other defiant opposition villagers were taken to re-education camps and
castigated for their treachery and perfidy while suffering long nights of
physical abuse and indoctrination.

Under his electoral regime, rural voters faced a world where silence was
the only option and chose to live in obedience, in silence, well aware any
dissent would be crushed.

Msipha said chiefs have over the years been very pivotal in the political
economy of rural areas as they act as instruments of both coercion and
party organisation.

“You cannot separate chiefs from Zanu PF in most of the Mashonaland areas
where they are also key elements of the party structure. With their
loyalty bought by the token cars, Zanu PF is guaranteed of the next rural
vote unless the opposition employs some sophisticated programmes to
outflank Zanu PF on the rural economy front.

“Cars are only cementing what ED has done through command inputs and other
programmes. Only an independent economic organisation in the rural areas
can liberate the people from Zanu PF structures,” said Msipha.

“Giving those cars is so insensitive at a juncture we have crisis in
social services with sewage gushing out of taps in Harare and hospitals
lacking essential drugs. This shows us that the military regime in Harare
is interested not in public service delivery and democracy but
strengthening its foothold on power,” opined Saungweme.

Mnangagwa’s spokesperson George Charamba has rejected charges that the
handover of cars was “sickening vote buying”, saying what was sickening
was a chief who goes about in scorch-cart or on a bicycle.

“Traditional leaders have conditions of service, and those conditions must
be commensurate with the dignity we attach to their office as traditional
leaders,” he told the Daily News.

“As a matter of fact, that condition went unmet for almost six or so years
because of problems of finance in government. If you remember, it was the
last act done by the former president, which the current president has
implemented. It’s not the first time chiefs are getting vehicles,”
Charamba said, warning the “unelectable” MDC against picking a fight over
that issue and alienating chiefs by questioning why they should be
driving.