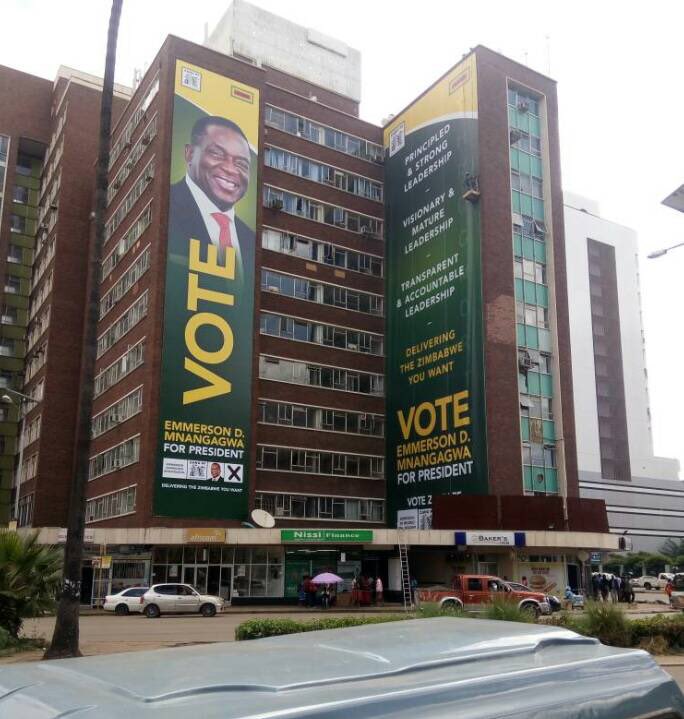 President Emmerson Mnangagwa has painted the country green with his huge campaign billboards inscribe with various messages to lure votes ahead of the forthcoming elections, from which he hopes to gain legitimacy, after toppling his mentor Robert Mugabe in a coup last year. 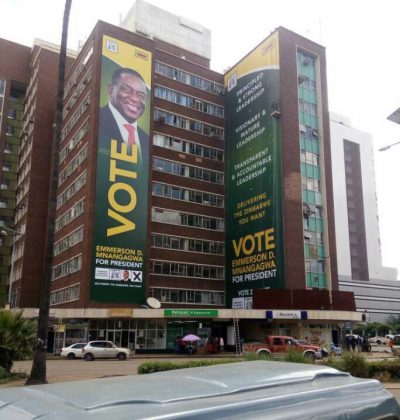 A collection of Mnangagwa’s messages in the various languages spoken in Zimbabwe seek to give people the hope that finally, Zanu PF has come of age and is ready to usher in the era of democracy and economic prosperity, which the ruling party has failed to deliver for nearly four decades.

Since his dramatic fall and rise to power in November last year, Mnangagwa has been pulling all stops to lure voters ahead of the polls described by his spokesperson George Charamba as all about “restoring legacy and legitimacy”.

The Zanu PF leader first embarked on a regional charm offensive to seek support for his rule before he went beyond the continent to China, and other countries.
Mnangagwa’s message — Zimbabwe is open for business — to woo foreign direct investment and mend the economy that suffered years of neglect under his party’s rule, is however fast losing its lustre on the backdrop of poor economic performance.

He made several promises soon after taking over power, setting himself ambitious targets within his first 100 days in office that earned him supporters back home, but as time flew by, frustration among Zimbabweans was evident.

Jobs are still elusive, the cash crisis remains a painful reality, the cost of living is rising and fuel shortages are resurfacing.

As UK-based Zimbabwean lawyer Alex Magaisa observed in his recent blog, expectations were very high for a man whose inauguration was a huge event.

“One would have mistaken it for the inauguration of a duly elected president,” Magaisa wrote.

“It was, as someone observed, over-compensation for the legitimacy shortfalls that accompanied his dramatic and unconventional rise to power.

“The authors of the coup needed to convince themselves and the rest of the world that they were in power and that required a grand ceremony to match.

“But it also promised much, yet the delivery has been disappointing on a number of fronts.”

Mnangagwa’s campaign billboards — just like the many big promises he has made since coming into power — have raised eyebrows.

“That’s a monstrous billboard; we don’t see such for politicians here in developed countries,” Talent Danga posted on Twitter recently.

“But a country on its knees with over 75% unemployment and a cash crisis has loads of them. Where is the sense in here?”

In the many billboards, Mnangagwa is promising good healthcare, sound education, modern infrastructure, free and fair elections, to stamp out corruption and, above all, deliver the “Zimbabwe you want” as he tries to fend off competition from the charismatic MDC Alliance presidential candidate Nelson Chamisa.

The disadvantage of incumbent leaders is that they are judged by what they have done, not what they can promise. Yet, Mnangagwa has reached new heights, taking even constitutional matters like free and fair elections to be part of his election campaign message.

The billboards have opened him up to criticism with his detractors pointing out that as one of the longest-serving government leaders, he should have done most of the things that he is promising to do after elections.

“The challenge with Mnangagwa is that he was in cabinet since 1980 and his Zanu PF party has been making promises and falling short on implementation for the past 37 years,” political analyst Gladys Hlatshwayo said.

“It is different from an opposition leader who does not have executive authority, and is judged by promises.

“The sitting president is judged by his actions. So what Mnangagwa says in his billboards does not matter.”

She added: “The challenge of leading a ruling party is that the people look at what you are doing because you are the one with the executive powers, rather than what you are promising.”

Hlatshwayo said the president had been doing advocacy and no action since he took over and as such failed to meet his own 100-day targets.

“He did a coup and took executive authority and did not deliver. He gave himself targets, but has failed, what then makes us believe that he will deliver now? Zimbabweans are not fools.”

Soon after taking over power, Mnangagwa promised to tackle corruption, but six months later the Zimbabwe Anti-Corruption Commission is yet to secure a single conviction. The fight against corruption is one of Zanu PF’s campaign promises.

“Zimbabweans rarely vote according to policy pronunciations of candidates. The majority have long made their political choices. However, what is of paramount importance is the electoral playing field. “As long as the state remains an extension of the ruling party, Emmerson Mnangagwa will win with whatever percentage he wants.”

However, another Harare-bases analyst, Alexander Rusero, said Mnangagwa was trying to live up to modern campaign strategies and the technique could earn him votes.