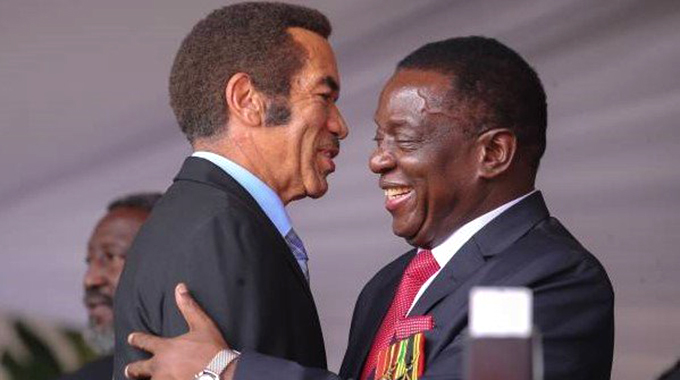 Leonard Ncube in Victoria Falls
PRESIDENT Mnangagwa and former Botswana President Ian Khama will be among the high profile speakers at this year’s Confederation of Zimbabwe Industries (CZI) congress and International Investment Forum to be held in Bulawayo later this month.

The forum will be held at a Bulawayo hotel between 26 and 29 this month. CZI Matabeleland chapter president Mr Joseph Gunda who is general manager of General Beltings, said revival of industry will be on spotlight during the specialised indaba.

Mr Gunda was speaking while closing the Higher Education Partnerships in sub-Saharan Africa (HEPSSA) and Joint Enriching Engineering Education Programme (JEEEP), which was organized by the National University of Science and Technology (Nust) here on Friday last week.

“The congress for CZI will be held in Bulawayo from 26 to 29 September and we’re excited to have it for the second time in the region after hosting it in Victoria Falls last year. We’re privileged as the Matabeleland Chamber as this means a lot to us because there is focus in Bulawayo, which was once the hub of manufacturing,” said Mr Gunda.

“We have sent invitations to President Mnangagwa and we hope he will be available because this is important for Zimbabwe as we try to sail through his economic mantra and his presence means a lot to send signal to the international community that we really mean business.

“We also have the former President of Botswana Ian Khama who will give remarks particularly focusing on diamond beneficiation. We want to learn how Botswana has benefited from diamonds and we believe that the journey, which Botswana took, will help us.”

Mr Gunda said the theme for the conference will be: “From dialogue to implementation, with focus on the need to act and make Zimbabwe achieve the middle income economy by 2030 through industrialization.

He said international delegations will be from Botswana, India, Italy, Japan Korea, South Africa and Turkey among others.

At last year’s international forum here, CZI signed MoUs with India and Turkey to create synergies towards capacitating local industries through exchange programmes. Mr Gunda said Zimbabwe benefited a lot after sending some delegations to the two countries to cement relationships. He said idea was to build Zimbabwe into a middle economy by 2030.

“We have tapped a lot of knowledge from Turkey and India who are on a road to recovery and we believe we have a lot to emulate. We believe it’s everyone’s responsibility to develop Zimbabwe and with the international industry coming through to help us develop our country into a middle income economy, we believe this is a forum where local companies especially Bulawayo should take advantage of and tap from,” he said.