The Rotary International was led by its vice president Mr Yinka Babalola.

Mr Babalola briefed President Mnangagwa on the free medical surgeries being undertaken by the Rotary Vocational Training team in Zimbabwe.

The exercise which started on February 26 ends on March 7.

President Mnangagwa was told that in Mutare, a team of doctors and volunteers undertook several medical procedures.

The visit by the Rotary International is the second in Zimbabwe and 44th in Africa.

The first visit to Zimbabwe was in 2015.

On completion of the tour of duty,  Rotary International will donate medicines and equipment to local doctors.

“We do carry health missions. This medical mission is one of those ones and this is a vocational training team,” he said.

Mr Babalola said the visit is not about bringing medical surgeons, but ensuring local professionals in the same field, acquire new techniques.

He said the organisation had pledged to furnish an eye centre with equipment in Mutare, once the Government identifies a suitable building.

“The President was very happy to meet with the Rotary International vice president, who is here leading a team of Rotarians who are with him,” he said. 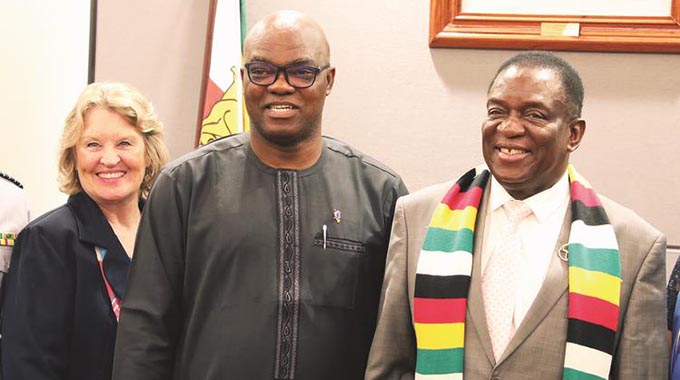 He said their member church, the Evangelical Lutheran Church in Zimbabwe (ELCZ), has been calling on them over the drought affecting citizens due to erratic rains.

Dr Junga said he was impressed to note the strong involvement of the ELCZ with the citizens.

“It is not a church which is living on its own, but it is rendering services in health and education in particular,” said Dr Junga.

“I was very grateful to see that at the same time, we see and understand the current situation. In fact, what we are committed to do is to seek ways of increasing our presence and support to the church so that it can be with the people.”

The ELCZ runs a number of churches and schools in the Midlands Province including Mnene and Chegato.