ED must make sure all govt workers are treated equally

Source: ED must make sure all govt workers are treated equally – DailyNews Live 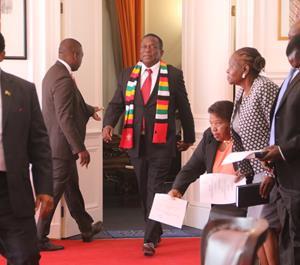 EDITOR – President Emmerson Mnangagwa, pictured, must ensure that the
preferential treatment the broke Zanu PF government has been according
Zimbabwe’s uniformed forces through early payment of their salaries is
stopped forthwith. This kind of behaviour shows how the Zanu PF uses the
divide and rule tactic to manipulate government workers.

Government coffers are dry and we all know that. However, when an employer
then religiously pays the uniformed forces ahead of other State employees
who face the same challenges, it smacks of discrimination.

In all fairness, government should rotate the privilege. Since no reason
has been proffered, people must be forgiven for opining that Zanu PF
government wants to placate uniformed forces so that they in turn obey its
orders.

Such an approach is openly selective and unfair. Other civil servants who
include nurses, teachers, extension workers, social welfare officers,
among others – obviously feel they are being treated as second-rate
employees.

Ironically, all civil servants have been pestering their employer for
better salaries and improved working conditions. This is the real issue
the teachers and nurses among others who toil daily to keep the wheel of
government service turning would want addressed.

The majority of the country’s rural teachers have to endure poor living
conditions in remote outposts, where they have to struggle to have access
to potable water and other basic services like transport.
Those who work in satellite and institutions in resettlement areas, the
living conditions are not bearable to say the least.

Nurses in State-run hospitals have to do with inadequate and dilapidated
equipment. Pensioners are probably the worst-hit as they have been
receiving their payouts well into the following month. These are people
who have worked all their lives and expect to enjoy in their retirement.

At least they should all be afforded some measure of respect by getting
their measly salaries and payouts on time. All government employees have
to service loans with financial institutions and have to pay rentals and
other monthly bills where they live. All these accrue interest when paid
beyond the last day of the month.

The openly contemptuous treatment of other State employees and pensioners
is a recipe for disaster, especially in a country with a restive
population that blames the Zanu PF government for presiding over the
worsening economic rot.

The government needs to be realistic and address pertinent issues that can
turnaround the country’s fortunes. Better still, they should just step
aside and pass the baton to fresh brains with alternative ideas.

Mnangagwa and his hangers-on in Zanu PF saw this coming, but chose to bury
their heads in the sand and pretended all was well. Cde Sox.