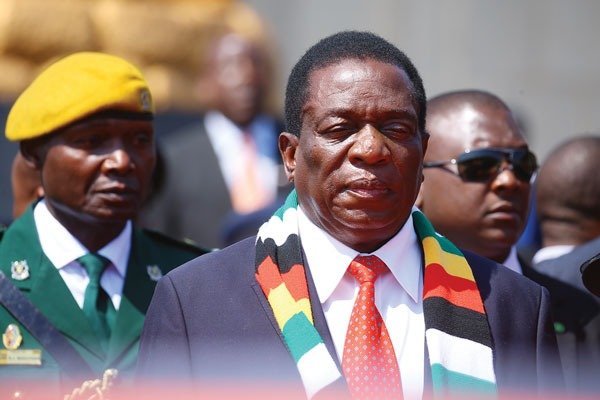 Addressing delegates who included regional leaders, Zanu PF and other top government officials during his inauguration ceremony at the National Sports Stadium, Mnangagwa said he was ready to reform the country by implementing his Vision 2030 anchored on re-engagement with the international community.

“Now that elections are behind us, we must now focus on addressing the economic challenges facing the country.

“To realise our vision and leapfrog our industrialisation and modernisation agenda, we will foster policies that attract both domestic and global capital,” Mnangagwa said before outlining a rundown of programmes that he hopes to implement.

“Now is the time for us to unite as a nation and grow our economy. Let us courageously and diligently embark on a shared journey towards the realisation of our national vision to transform Zimbabwe into a middle-income economy with the increased investment, decent jobs, broad-based empowerment, free from poverty and corruption by 2030.

“My government will, in the next five years accelerate industrialisation, modenisation and mechanisation, with greater emphasis on market-driven policies. Furthermore, comprehensive strategies will be put in place to stimulate the value chains across our industries and commerce,” he said.

Mnangagwa said he would invest heavily in modernising roads, airports, railways and border posts to allow Zimbabwe to connect with the outside world with ease.

The President said he had set up incubation hubs that encourage innovation and inventions to ensure implementation of his vision.

He threatened to root out bureaucratic bottlenecks, unnecessary delays, lethargic and corrupt activities as he strives to set up a government accountable to the general public.

Mnangagwa said he will also take measures to correct the fiscal imbalances which have undermined the financial services sector causing cash shortages.

The Zanu PF leader applauded the Constitutional Court for dismissing his rival Nelson Chamisa’s election petition, and pledged to institute a commission of inquiry to probe the fatal shooting of seven people during MDC Alliance protests in Harare on August 1.

“The isolated and unfortunate incident of violence that reared its ugly head on August 1, 2018 was regrettable and most unacceptable. Such conduct should be alien and vile to our nature, culture and traditions as the Zimbabwean people.

“To put closure and finality to the matter, I will soon be announcing members of the commission of inquiry into the said violence who will upon completion, publish their findings.

“Once again, I would like to extend my deepest condolences to the families who lost their loved ones,” he said.