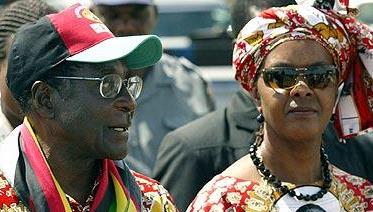 HARARE – As the frosty relations between President Emmerson Mnangagwa and
his sulking predecessor Robert Mugabe get better, the government splashed
hundreds of thousands of dollars last week hiring a charter plane for
former first lady Grace – to allow her to fly from Singapore to Harare for
her mother’s burial, the Daily News can report.

Grace had been in Singapore receiving treatment for an undisclosed ailment
when her mother Idah Marufu died last week – prompting Mnangagwa and his
government to scramble to find funds to charter the plane so that she
could attend her mother’s burial.

This comes as Mugabe, who until recently had been feuding with Mnangagwa
and his colleagues in government, recently made a stunning about-turn –
moving to end his tiff with his former long-serving aide by congratulating
him for winning the hotly-disputed July 30 presidential poll.

Mugabe who fell from power in November last year, on the back of a
military intervention, had until last month not hidden his bitterness and
disdain for Mnangagwa and his administration.

Well-placed sources confirmed to the Daily News yesterday that Grace had
received “five-star treatment” from the government in her hour of need,
after Mnangagwa dug deep into the country’s coffers to bring her home in
time for her mother’s funeral.

“Yes, there was a plane that was sent specifically for her because we do
not have a direct flight to Singapore. We were all amazed at the display
of compassion from the president and the government.

“As a result, her trip was hustle-free, thanks to the government. They
(Mugabes) received all the help befitting people of their status,” one of
the sources close to the former first family said.

Although the Daily News could not get the exact cost of the plane charter,
other sources said this had likely run into hundreds of thousands of
United States dollars.

Mnangagwa’s spokesperson George Charamba, who is with the president in
China this week, said he could not comment on the matter – referring all
questions to Regis Chikowore, the principal director in the ministry of
Media, Information and Broadcasting Services, who was not available for
comment.

But National Patriotic Front (NPF) spokesperson, Jealousy Mawarire – who
has lately acted as a media intermediary for the Mugabes – confirmed the
development by thanking Mnangagwa and his government for hiring the plane
on micro-blogging site Twitter.

“I want 2 thank Mnangagwa and his presidium for facilitating the travel of
former First Lady Dr Mugabe back home for the funeral of Ambuya Marufu.

“Such a gesture is very invaluable and much appreciated. May the Lord keep
u, lift up His countenance upon u and give u peace,” Mawarire said.

This comes after Mnangagwa sent a heartfelt  condolence message to Mugabe
and his family upon learning of the death of Marufu, in a move which was
widely seen as a continuation of the mending of relations between him and
the country’s former long-ruling leader.

“I learnt with sadness of the death last night (Thursday) of Ambuya
Marufu, mother to our former first lady Amai Grace Mugabe and
mother-in-law to Cde RG Mugabe.

“The sorrowful development visits us at a time when the Mugabes are not
well, with Amai Mugabe away in Singapore where she has been receiving
medical attention. My heart goes out to the family.

“I urge our entire nation to stand with and rally behind the Marufu and
Mugabe families, so their sorrows are assuaged and made bearable,”
Mnangagwa – who had previously dropped the prefix comrade when referring
to Mugabe – said.

Until Mnangagwa’s inauguration, Mugabe had been involved in an acrimonious
relationship with his successor – following his stunning fall from power
late last year, which he described as an assault on constitutional
governance by the military.

And on the eve of last month’s national elections, the former president
went on to throw the cat among the pigeons when he publicly endorsed
opposition leader Nelson Chamisa – before telling the nation that he would
never vote for Mnangagwa and Zanu PF.

“Let tomorrow decide … there should be a big no to guns directing
politics. We shall never again experience a time when an army is used in
politics.

“I have never met Chamisa. I wish to meet him if he wins. I can’t vote for
those who’ve caused me to be in this situation.

“I hope the voting which will be done tomorrow will thrash away the
military form of government and bring us back to constitutionality,”
Mugabe told journalists at the time at his Borrowdale mansion which is
popularly known as the Blue Roof.

Despite the fact that he had done all in his power to derail Mnangagwa’s
and the ruling Zanu PF’s electoral bids on the eve of the elections,
Mugabe moved to end months of his acrimonious relationship with his former
comrades by sending his daughter Bona and her husband Simba Chikore to
deliver a special congratulatory message from him and Grace at the
president’s inauguration.

The sickly 94-year-old and Grace were unable to attend the big occasion
due to their poor health, which had resulted in her flying to Singapore
for medical attention.

Interestingly, Mnangagwa’s government had listed the former first couple
among the dignitaries who were slated to shake hands with Mnangagwa at the
inauguration ceremony at the National Sports Stadium.

“Your Excellency, thank you for your invitation, my wife is not well in
Singapore, I am also not well, so I am sending my daughter and son-in-law
to represent us.
Congratulations,” Mugabe said in his surprise message that was read by
Mnangagwa as he delivered his main address to thousands of people who
packed the giant stadium.

Mugabe resigned from office late last year, a few hours after Parliament
had initiated proceedings to impeach him – after he had refused to leave
office during eight tense days that began with the military intervening in
the governance of the country.

The operation also saw the nonagenarian and the unhinged Grace being
placed under house arrest, while several Cabinet ministers linked to the
Generation 40 faction – which had coalesced around the Mugabes – were also
targeted.

The annihilated G40 was, before the military intervention, locked in a
bitter war with Mnangagwa and his supporters for the control of both Zanu
PF and the country.