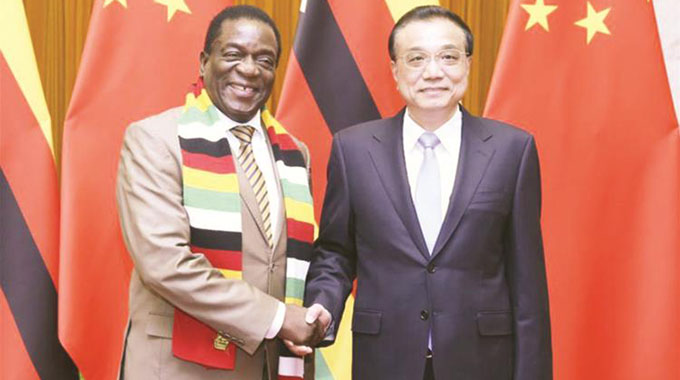 President Mnangagwa meets with Chinese Premier Li Keqiang at the Great Hall of the People in Beijing. – Picture by Xinhua

A DELEGATION of 60 Chinese Government officials and private business investors arrived in the country yesterday to scout for more opportunities in the local market. The visit comes hardly two months after President Mnangagwa went to China on his first State visit after becoming President of the Republic of Zimbabwe in November last year.

That the delegation comes just ahead of Zimbabwe’s 2018 harmonised elections scheduled for July 30 is a sign of the Chinese’s confidence in President Mnangagwa and his new dispensation, more importantly when MDC Alliance presidential candidate Nelson Chamisa recently declared that if he won the elections his Government would not work with the Chinese.

But undeterred, China has seen it fit to proceed with scouting for business in Zimbabwe, which still has vast untapped mineral resources and business opportunities. The visit also comes after President Mnangagwa recently told potential investors that time to invest was now instead of waiting for the post-election rush.

China is a serious business investor the world over and can only be spurned by those who do not understand the global business matrix.

The economy of China is the world’s second largest by nominal Gross Domestic Product and the world’s largest by purchasing power parity, according to the International Monetary Fund.

Due to historical and political facts of China’s fast developing economy, the country’s public sector accounts for a bigger share of the national economy than the burgeoning private sector and it is therefore important to do business with China.

Being the country with the world’s largest total banking sector with assets worth $39,9 trillion and $26,54 trillion in total deposits, it means Zimbabwe’s banking sector can negotiate deals with value investors.

China is the world’s largest manufacturing economy and exporter of goods and it goes without saying that Zimbabwe needs to revamp its industry.

It is fact not fiction, that China is also the world’s fastest-growing consumer market and second-largest importer of goods. China is a net importer of services products. Investors know that China is the largest trading nation in the world and that it plays a prominent role in international trade and has increasingly engaged in trade organisations and treaties in recent years and Zimbabwe can leverage this experience.

China became a member of the World Trade Organisation in 2001 and has free trade agreements with several nations, including Australia, New Zealand, Pakistan, South Korea and Switzerland.

This is how critical it is for Zimbabwe to continue engaging China and a delegation this big talks to the importance the Asian economic giant attaches to its relations with Zimbabwe. It is Zimbabwe which stands to benefit more from Chinese experience, if only our business actors negotiate good deals.

The delegation could not have come at a more opportune time. It shows the confidence they have in the new administration and they should be treated as the all-weather friend China has proved to be at the worst of times.