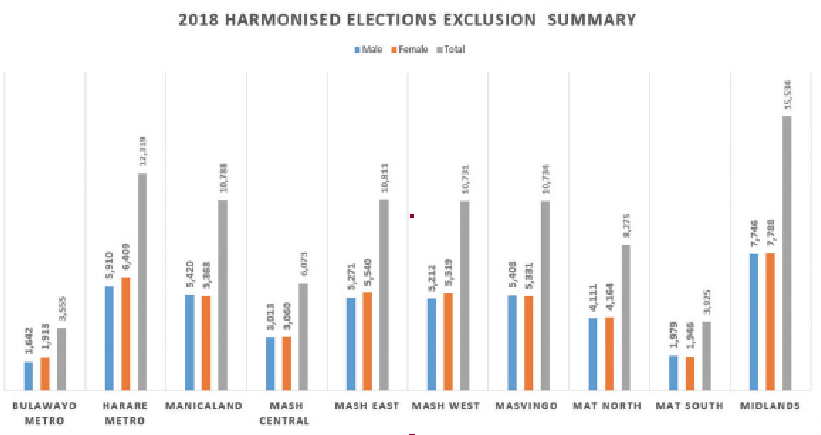 ALL election material, including polling booths and ballot paper, have now been dispatched to the 10 provincial command centres for onward transportation to the constituency elections offices ahead of the crucial general elections being held on Monday, Zimbabwe Independent can reveal.

This comes as close to 93 000 irregular voters have been placed on the exclusion list across the 10 provinces, with the Midlands having the highest number of people with inaccuracies or duplication quarantined, followed by Harare province.

Zimbabwe Electoral Commission (Zec) sources said the last delivery of election material was completed on Wednesday and Harare was the last province to receive the ballots, equipment and other material.

The sources said the election material and equipment was now being transported to the various constituencies yesterday.

According to the Zec Electoral Officers Manual, the election material is received by the presiding officer three days before polling at the constituency elections office.
Zec said the Midlands has 15 534 irregular voters on the exclusion list, while Harare has 12 319, Mashonaland East 10 811, Manicaland 10 788, Masvingo 10 734, Mashonaland West 10 731, Matabeleland North 8 275, Mashonaland Central 6 073, Matabeleland South 3 925 and Bulawayo 3 555.

“The Zimbabwe Electoral Commission carried out the biometric voter registration (BVR) exercise from September 14, 2017 to June 1 2018. In the process of registering voters there were duplicates which were picked by the consolidated system,” a Zec official said.

“These include those voters who transferred during inspection. Most of these were archived during adjudication. Section 32 of the Electoral Act (Chapter 2:13) mandates the Commission to ensure that no one person appears more than once on the voters roll. This process identified and archived 71 140 registrants who registered twice and or transferred but will on the exclusion list.

“A total of 8 146 registrants who had successfully registered as voters were excluded from the roll on the ground that they were deceased,” the source said, adding that the Midlands also had the highest number of deceased people put on the list followed by Mashonaland East with 1 988, Manicaland 1 647, Matabeleland North 1 319, Mashonaland East 1 228, Masvingo 1 183, Harare 861, Mashonaland Central 854, Matabeleland South 336 and Bulawayo 173.

There were 39 892 registrants with duplicates arising from transfers and 31 248 with duplicates from multiple registration, 11 767 with invalid national identities (IDs), 1 667 sharing IDs and other details and 25 not in the civil registry system.

There are 5 695 706 registered voters for the make-or-break elections in which 23 presidential candidates will battle it out, although in reality it is a two-horse race between Zanu PF’s Emmerson Mnangagwa and MDC Alliance’s Nelson Chamisa.

Over 3,07 million of the registered voters are females, while 2,62 million are males. This is the first post-Robert Mugabe election, and youths hold sway in the outcome. A total of 10 985 polling stations have been established countrywide in 1 958 wards.

Zec has recruited a total of 131 000 electoral officers to conduct various duties during the polls and this week it conducted training for the poling officers and political parties’ election agents across the country.

The source said the deployment of electoral officers started yesterday.

“In order to prepare and conduct the 2018 harmonised election the commission was allocated US$95,9 milion out of a bid of US$178 million budget. As of July 19 over 97% of the funds had been released into the commission’s account and these resources have been utilised towards preparations for the upcoming elections,” the source said.

The government funding was complemented by the cooperating partners such as the United Nations Development Programme, Electoral Institute for Sustainable Democracy in Africa and International Foundation for Electoral Systems in areas such as voter education, communication, training and data centre upgrade.