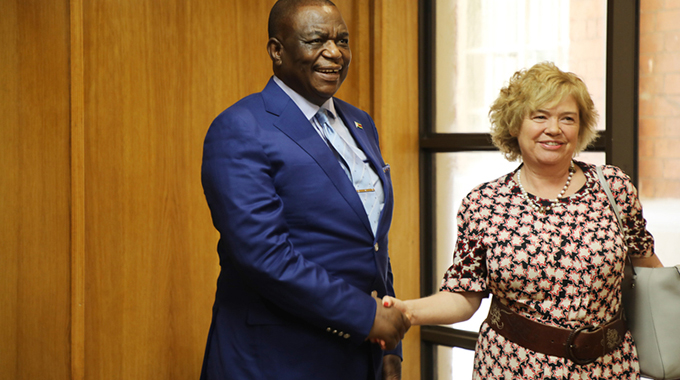 Ambassador Laing said this after paying a courtesy call on Vice President Constantino Chiwenga to bid him farewell.

“The UK and Zimbabwe relationship is in a much sounder footing now, we have a complicated history. We have had our ups and downs in our relationship and it hasn’t always been easy but what I said to the then President (Mr Mugabe) on my arrival and the current President (President Mnangagwa) on my departure is that what is absolutely critical is that we can have frank conversations respectfully in our mutual interest and that is what I am most proud of. That is what I feel I have achieved.

“I have got that relationship back to a more grown up, more beneficial and constructive level of engagement where both parties can raise issues of concern and we try to find the way forward,” she said.

Ambassador Laing said apart from the improved relations she was also looking forward to seeing Zimbabwe continue with its reform agenda to attract foreign investment.

“The major highlights (of her tenure) are the transitions that have happened here; the events of November and obviously the harmonised elections and I am looking forward to the future of Zimbabwe and in my departure calls I have been emphasising the importance of frontloading economic and political reforms which are necessary for the country but also to build the confidence of the international community who want to come in and support but need to be clear and confident that Government is clear in that reform agenda,” she added.

President Mnangagwa has already announced a raft of measures aimed at winning the confidence of investors including improving the business environment, fighting the scourge of corruption and guaranteeing property rights.

Some of the measures Government will take were announced by the President in his first State of the Nation Address and officially opening of First Session of the Ninth Parliament this week.