Equality yes, but not yet 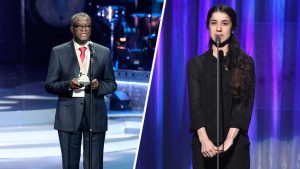 Source: Equality yes, but not yet – The Zimbabwean

The Nobel Peace Prize has just been awarded to Denis Makwege and Nadia Murad for what they have done to alert the world about the use of rape as a weapon of war. Makwege is a Congolese do­­­­­­­­­­ctor from Bukavu who has helped countless women who were not only raped but also brutally mutilated by soldiers from all sides in the wars of the Great Lake region.  It is a grotesque abomination to use sheer force in this way on women.

Physical violence of this sort is an extreme example of an attitude that is full of hatred for others and has lost all sense of our common humanity and our common home.   There are those today who deny the existence of hell. Well, this is hell.  We may look at it from a distance and say it has nothing to do with me, but we are all contaminated.

In our modern age of reason and enlightenment nations have reflected on their beliefs. The French proclaimed liberty, equality and fraternity (community of men and women). And the Americans wrote: “We hold these truths to be self-evident that all are created equal.”  Yet our high ideals often remain only ideals that are ignored.

The good news is that the truth about our equality is pushing forward every day. Huge numbers of Americans who watched their Senate Judiciary Committee last week heard allegations of sexual violence against a women by a man who wants to be a Supreme Court Judge.  And recently I was in Ireland where Pope Francis’ was encouraging people to live the values of family life against the background of outrage in the media about clerical abuse of vulnerable people, most often children, and the subsequent cover up.

It is good that so much that is hidden is coming into the open. It is painful and it will get worse as revelations emerge in countries where the truth is still hidden. When it does happen it will be horrible but it will also be purifying and wholesome.  The pope himself is the visible focus of much anger simply because he is pope.  He is also the focus of all those who have hope that this agony in the garden will lead to new life for the Church and for society everywhere.  He carries the pain and the hope of many. The tsunami is only beginning. What will it be like when the waters of devastation subside?  This week I heard a bishop compare what is happening to the Reformation in the sixteenth century when the Church was torn asunder by her own members.

In all of this the Church is a sign.  At the moment it is a sign of confusion and despair – like the disciples who ran away during the passion and deserted Jesus.  It is also a sign of something new arising from the blindness and mind-set that pushes back against any effort to expose them.

In the midst of his passion Jesus stood there before Pilate who announced, “Ecce! Behold the man!”  Little did he know what he was saying, “This is the One.”  This is the One who gives the way to a lost world. “In the beginning God made them male and female,” he says, “and they are one.”

An interviewer said of Mukwege, “For someone who has witnessed so much cruelty and suffering, Dr. Mukwege could be forgiven for not having a very hopeful view of our world. But when I met him in New York last year, I was struck not only by his warmth and gentleness, but also his incredible optimism.  ‘What is keeping me going,’ he said, ‘is really the strength of women. I discovered how women are strong, how women can rebuild, and give hope for our humanity. They have taught me a lot about how we can make our world better, by not only thinking about yourself but to think about other people.”