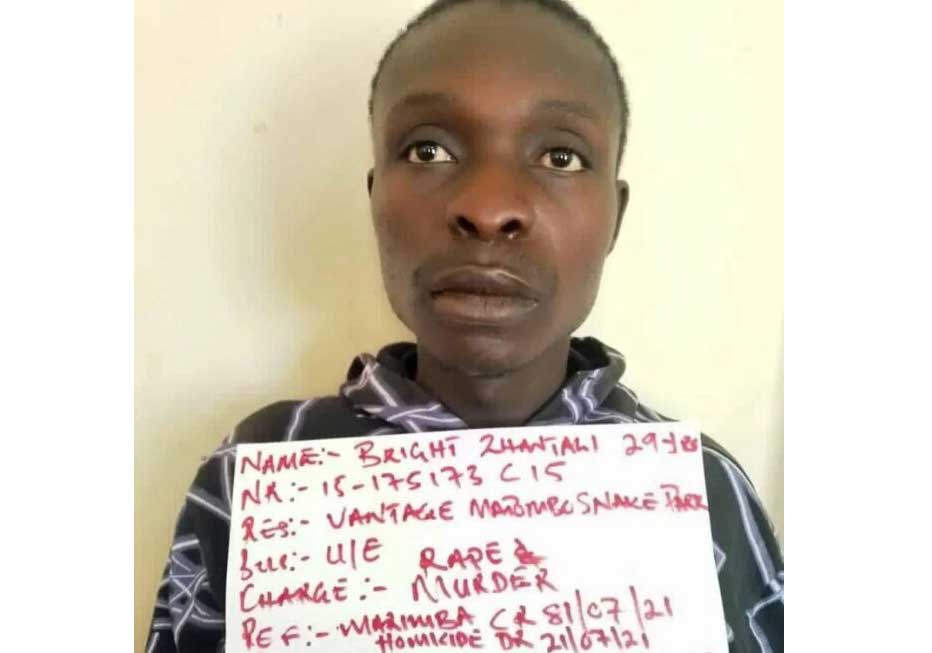 She stared the “devil” right in the eyes and said a prayer as she was robbed and later raped.

Why me? That is a question that still begs for an answer in Naomi Sibanda (not her real name) mind as she seeks closure to her recent nightmarish experiences at the hands of serial rapist and murderer Bright Zhantali currently facing 23 charges of murder.

The same question rings in her mind as she seeks to understand the miracle that led to her survival.

She met the devil incarnate live and was raped, robbed and assaulted but it seems the devil was not hungry enough for her blood this time.

“It was God. I could have died,” Sibanda said, fighting back tears flooding her eyes.

She could easily have become grave number 24, but somehow survived the wrath of Zhantali’s killing hand.

NewsDay visited Sibanda at her homestead at a farm outside Marondera where she narrated how she was raped and robbed, but spared from death by Zhantali.

Before his incarceration in March Zhantali had raped, robbed and murdered 23 women in at least four provinces.

His reign of terror in Marondera was recorded between February and March, raping and killing close to 10 women.

The first victim was an AFM pastor who he raped and killed using an axe, while she was praying.

The second victim was a woman looking for mushroom who he raped before killing her by crushing her head with a stone.

“It was on Valentine’s Day, a day to celebrate love, but my wife was unfortunate to be abused like that,” Moyo’s husband said.

It was around lunch time as Sibanda, with her then 10-month-old baby strapped on her back, headed to the school to fetch the other kids.

One of the kids was her neighbour’s as they took turns to accompany them to and from GRS.

The news of the existence of a serial killer around the area had already filtered to her, but she had no option but to go and collect the kids.

“Upon arrival at the Harare-Mutare Highway, I saw a person lying on the ground under a Msasa tree. Since the place is known for being frequented by vendors selling milk I thought, maybe it was one of the vendors resting,” she narrated.

The mother of five crossed the highway and took a footpath across a gumtree plantation.

After walking deep into the plantation, she noticed a man following her.

He caught up with her and introduced himself as a killer.

“He told me that he was the one behind the murders in the area and that I was to comply with his demands if I wanted to live. His left eye was red and swollen while he also had a scar. It was clear he had fought with someone,” Sibanda narrated.

Zhantali said one of the victims who gave her a torrid time was the AFM pastor Nelia Maringe. He confessed that she fought him until he subdued her with an axe.

“I knew I was dead, I said my last prayer silently. I became powerless, I couldn’t scream. I thought of my baby at the same time,” Sibanda said.

Sibanda’s phone, stashed in her bra, rang and Zhantali demanded it.

Zhantali asked the value of the phone and she told him that the phone was bought by her brother so, she did not know its value.

Zhantali dragged her into the gumtree plantation and demanded sex from her.

“He demanded sex and I told him I was menstruating. He ordered me to kneel down, released his manhood and ordered me to suck it, I complied. After that, he wanted to fondle my breast, but my baby woke up. He then raped me through the anus, it was terrible,” Sibanda recalled.

After the heinous act Zhantali asked Sibanda the other routes that women usually use to fetch their children.

He also bragged that he won’t be arrested.

“He told me that he lived in Harare and that they wouldn’t arrest him. He then ordered me to go,” she said.

Sibanda then got assistance at a house in GRS and the police was alerted and her husband was also informed.

The police reacted swiftly and attended the scene, but Sibanda’s husband was furious that the police
were ill-equipped to track Zhantali down.

“We tracked the perpetrator’s footprints, they were still fresh. Police came, but they had no sniffer dogs. We thought it was a good idea to bring them. I feel if they had brought the dogs Zhantali could have been nabbed that day.

“The police said the dogs only boarded a police vehicle, and on this day they were using a civilian’s car. That was a lie, because earlier they came with dogs in a civilian’s vehicle at Eagle Tanning to control the crowd during a vaccination programme,” he said.

Sibanda suffered from trauma, but thanks to her husband who has stood by her.

“I had to go to Marondera Hospital for treatment. My daughter in South Africa suggested that I book for a counsellor so that I get assistance. I found it meaningless because the best counsellor was my husband and relatives. They have been and are still there for me,” she said. After a number of rapes and murders mostly in Marondera Zhantali was finally arrested in Harare and confessed that he raped Sibanda. He is yet to stand trial.

“If I were a judge I wouldn’t hesitate, he should be hanged. He is a misfit in society,” Sibanda said.