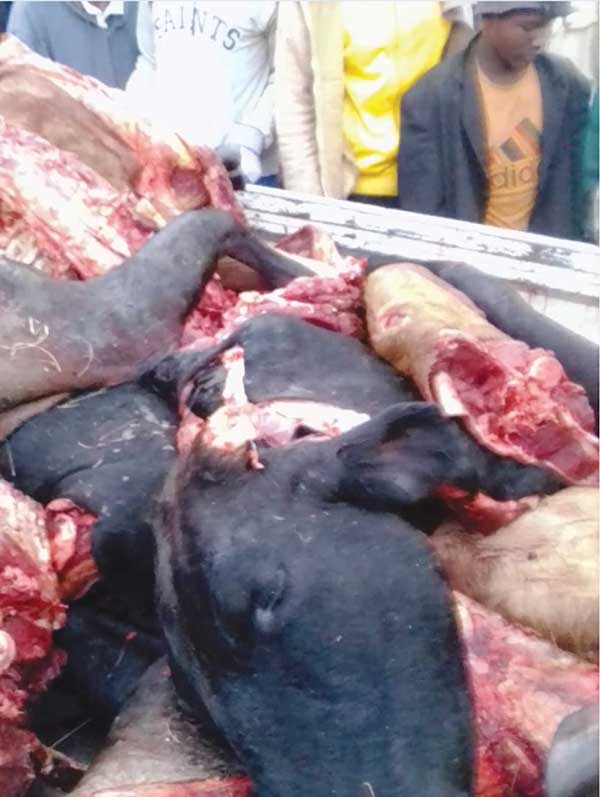 BY SILISIWE MABALEKA
ESIGODINI villagers recently ambushed four cattle rustlers and effected a citizen’s arrest on one of them, while his three accomplices fled.

The rustler was arrested after being found in possession of five slaughtered beasts at Irisvale in Esigodini, Matabeleland South.

“The villagers, who were on patrol, became suspicious when they saw a Mazda Titan vehicle that was moving around. They executed an ambush. When the vehicle returned carrying the slaughtered cattle, the suspects noticed that the road was blocked and ran away,” Mangena said.

“The village-based team managed to arrest Kunene, who implicated the other three, only identified as Mathe, Ndlovu and Mpofu saying they were people from Bulawayo.”

Mangena said the owner of the stolen cattle was Micklus Dube, adding that he managed to identify his beasts because they were branded. The matter was reported to Esigodini police.

“We kindly request members of the public to assist with any information that can lead to the arrest of the three suspects,” Mangena said.

A villager told Southern Eye that Kunene had told them that they were taking the beef to Thorngrove in Bulawayo.

“As villagers, we are saddened by such incidents that are still prevalent in our community despite the law that the police seek to enforce. Thieves do as they please. What gives us hope is that one person has been caught,” a villager said.