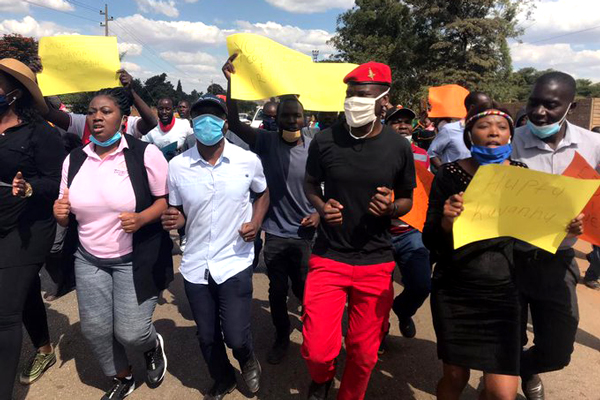 The European Union (EU) and the United Kingdom (UK) have urged President Emmerson Mnangagwa’s administration to ensure that legislator Joana Mamombe and two other MDC Alliance officials, who were reportedly arrested on Wednesday, are found.

Harare West legislator, Joanna Mamombe who is also the Nelson Chamisa led party’s secretary for policy and research, together with youth assembly vice-chairperson Cecilia Chimbiri and deputy organising secretary Netsai Marova were rounded up by police after the protest held in the capital’s Warren Park suburb but their whereabouts are up to now unknown.

Agency Gumbo, a lawyer for the three, said they had gone to several police stations in search of the opposition members, but could not find them, with the cops denying ever having arrested them.

This is despite the fact that police spokesperson, Paul Nyathi had earlier confirmed the arrest of MDC officials.

“[We are] concerned to hear lawyers still not told of (the) whereabouts of three female MDC officials reportedly arrested in Harare,” the UK embassy tweeted.

“[We] urge authorities to use their resources to locate (them) urgently in line with security services’ obligation to act at all times in line with Zimbabwe’s law and constitution”.

The European Union also took to the same platform to register its concern.

“We are concerned that three female MDC officials remain missing after they were reportedly arrested in Harare yesterday.

“We urge authorities to swiftly and in line with constitutional and legal obligations (to) assist lawyers and relatives to establish their whereabouts and wellbeing.”

Mfundo Mlilo, an activist, tweeted that he had received a message from Mamombe on Wednesday, telling him that she had been arrested.

He said he organised food and lawyers and went to Harare Central Police station, where he expected to find Mamombe, but the police denied ever having arrested her.

The Zimbabwe Lawyers for Human Rights has said it will be filing a court application in order to force the authorities to reveal where the MDC officials are.