The highly respected Paramount Chief of the Ndiweni people in Zimbabwe’s Matabeleland province, Chief Nhlanhla Felix Ndiweni, has spoken out strongly against the government’s decision to evict popular Ntabazinduna white farmer and photographic safari operator, Brian (Buz) Davies and his wife Carol from their property. 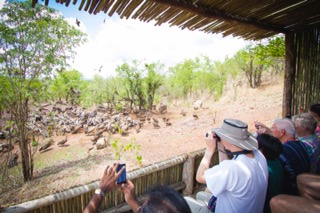 The couple was served with an eviction notice on April 9 by a former employee, Floyd Ambrose, despite his signing a formal memorandum of understanding (MOU) with the Davies family in 2014.

The eviction notice was issued by the magistrate’s court in Bulawayo and they were given just six days in which to pack up and leave.

According to the agreement, the Davies family moved back into their safari lodge, which Ambrose had ruined through negligence and neglect, while Ambrose moved into the Davies’s remaining homestead in 2014.

Mr and Mrs Davies lodged an urgent appeal on Friday, April 12, which was set down by the court for April 17, but they have now been informed that it will only be heard on April 29.

Their once highly successful farming enterprise, located at Ntabazinduna, about 30km northeast of Bulawayo, Zimbabwe’s second city, has been in the family for more than 66 years. It was purchased legally by Mrs Davies’s grandfather, Jack Parsons, in 1953.

Mr and Mrs Davies are the son-in-law and daughter of the late Peter Parsons, who was chairman of Colcom, the commercial subsidiary of the National Pig Breeders’ Co-op, which was set up in 1943 and was a forefather of pig production in Zimbabwe.

The Parsons/Davies family was the largest pig producer in the country, with over 12,000 pigs, a large cattle herd, a commercial crocodile farm and a well-established and very successful photographic safari operation.

With the permission of Chief Nhlanhla Ndiweni’s father, the late Paramount Chief Khayisa Ndiweni, they built Chief’s Lodge on the top of Ntabazinduna Hill, a famous historical site that is important in the Ndebele culture. Chief Ndiweni named the Davies family custodians of Ntabazinduna Hill and the family promised to preserve it.

The family employed more than 350 staff who, together with their families, were wholly reliant on income generated from the farming and photographic safari operations.

The employees and their families – more than 2,000 people in total – were all housed on the farm. The Parsons/Davies family built a school for the employees’ children, which is still supported by the Davies family.

Chief Ndiweni expressed his anger at the eviction and told the media that the College of Amakhosi and the Ndebele nation totally and emphatically rejected the eviction.

“It is an eviction that will never be accepted and will continuously be challenged on the ground, locally, regionally and internationally,” he said.

The College of the Amakhosi has called for the US government and the European Union to increase the targeted sanctions and travel bans placed selectively on members of President Emmerson Mnangagwa’s administration.

“Relaxing or removing the sanctions upon this administration will only serve to make life even harder for the local people,” Chief Ndiweni said.

“A good administration would never in a million years proceed with such an eviction, which is a disaster for the family concerned and the local people,” he stressed. He said he would do everything in his power to block the eviction.

Prominent Bulawayo-based human rights lawyer and former minister of education in the coalition government (2009-2013), David Coltart, has described the eviction as senseless.

“This is just ludicrous – the so-called new dispensation says that land invasions have stopped and yet this family is being forced from their home and business,” he said.

“This (Chief’s Lodge) is a tourist facility, located near Bulawayo’s airport … it is only 21 hectares and was a lodge until it was trashed by the same person trying to take it over again. Buz and Carol Davies have been renovating the lodge over the last few years with a view to opening it again, but now out of sheer greed a Zanu-PF-connected person wants it,” Coltart added.

Despite Mnangagwa’s reassurances, efforts to grab productive agricultural enterprises are continuing at a time when the country is once again experiencing severe drought conditions in certain districts, as well as the devastating consequences of the 19-year farm chaos.

On February 28, the United Nations and Zimbabwean authorities launched a massive appeal for US$234m for more than five million people – around one third of the population – who are in need of urgent food due to drought and a weak economy.

This amount was increased to US$613 million following the devastation caused by Cyclone Idai which battered the east of the country during mid March. Of this, about US$300 million would be required for food aid. Mnangagwa has now admitted that the number of people needing urgent food aid has risen to 7.5 million, almost half of the population, both rural and urban.