Exchange Control is the Central Problem facing Zimbabwe at Present

Source: Exchange Control is the Central Problem facing Zimbabwe at Present – The Zimbabwean

By introducing Exchange Control via the Reserve Bank the State has done the following: 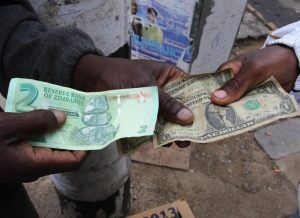 In addition to the above factors, the introduction of exchange control and the way it is being administered by the Reserve Bank is having the following effect on local markets and on the productive sector:

We have the right intentions but are not moving fast enough on this crucial problem. The fundamentals are sound in Zimbabwe but these distortions in market prices must be addressed and addressed immediately. The chaos in all local markets has its root cause in this system and only its complete and immediate dissolution will restore order.

If we were to announce that with immediate effect all retentions of export earnings by the Reserve Bank are suspended and exporters should retain 100 per cent of their sales in their own FCA accounts, the result would be to release US$3 billion into the open market for hard currency. My own view is that total hard currency inflows to Zimbabwe from all sources probably approach US$8 billion at this time (Exports, Tourism, Transfers, Remittances etc.). However, the retention of earnings by the export sector and others affected by exchange control sweeping activities would immediately reduce open market rates for the RTGS dollar. Most business persons say they think it could go to 2 to 1 or slightly more – but the consensus is that it would strengthen rather than depreciate.

In addition, it would then require that everyone who wants to import or pay external expenses will have to rely on the open market and that the majority of such transactions would shift from the informal sector to the Banking system. This would not only strengthen the banks but will also boost the net income of all exporters and earners of hard currency. The impact on the productive sector would be immediate and substantial and in my view will lead to an immediate surge in overall foreign earnings in the formal economy. It will boost the profitability of the most competitive of our industries and boost tax collections.

The Banks would trade currencies on behalf of their clients and the market will clear each day at set exchange rates which would then be published and set the basis for market prices. This would remove from the market opportunities for rent seeking and arbitrage and supply and demand would balance themselves out in the open formal markets of the country.

One inevitable consequence of these changes will be a short term rise in inflation over six months before it settles down to a longer term rate based on the economic fundamentals. The result will have to be a process to adjust salaries to reflect the new realities. This gives us the opportunity to compensate for the rising prices but at the same time address anomalies in the salary structures of the private and the public sector. This also creates the opportunity to activate the Tripartite Negotiating Forum and reach consensus on the way forward which would stabilise our politics.

My own view would be to run with the RTGS and the Bond notes under these conditions for 6 months and then introduce a new local currency managed by the Monetary Policy Committee in the Reserve Bank. When this happens demonetize the Bond notes and replace them with the new currency at full supply to meet transactional demands.