Dusk had fallen on the second day of violent anti-government protests in Harare when the company commander gathered his men and relayed orders for the night’s operation.

The task, said a long-serving NCO, was straightforward: go into the poor suburbs of Zimbabwe’s capital, locate opposition activists, and “punish them”.

“Our lieutenant told us to go in and find them. We got our information of where the Movement for Democratic Change activists live from members of our party, Zanu PF,” the soldier told the Telegraph this week.

According to his own account, the soldier would take part in systematically breaking legs and would personally commit at least one rape in a door-to-door operation on the night of January 15.

At least 12 people have been killed and more than 300 wounded, many of them with gunshot wounds, since violent protests broke out across the country on January 14.

Zimbabwe’s government has denied authorising soldiers to commit abuses in its efforts to restore order.

But the country’s independent Human Rights Commission has accused security forces of systematic torture in the subsequent crackdown. Rights groups on Friday raised the alarm about sexual violence.

“We have received very disturbing reports of a number of cases of women allegedly raped by members of security forces,”  Dewa Mavhinga, southern Africa director for Human Rights Watch, said on Friday.

“Beatings, harassment and other abuses have continued after Mnangagwa’s return and there are no clear actions from the government to hold accountable those committing the abuses.”

The soldier the Telegraph said he had no regrets and freely admitted to committing a rape. “It was night. We were looking for someone in the MDC. We had an address, this lady was sleeping with a light on. I asked is her husband there, and she said she doesn’t have one. I was done in a minute,” he said. 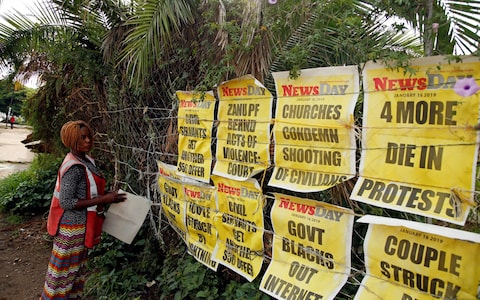 The man also said his unit, who wore civilian overalls and no insignia during the operation, broke “many bones” of MDC supporters by pinioning them to the open back panel of an army pick up truck and then smashing it closed on their legs.

“And so we have to beat them. We stopped them. Don’t believe we didn’t stop them. We did. We will do this again,” he said.

A solider in a different regiment said he had been sent on a similar punitive expedition in poor townships last week.

Trade Unions and the opposition Movement for Democratic Change called protests and a strike after President Emmerson Mnanagagwa announced a hike in petrol prices on January 12.

Hundreds of people were arrested in the subsequent crackdown on protests, which the government says was a justified response to street violence and looting.

Zimbabwe’s High Court on Friday deferred until next week a decision on whether to free an activist pastor detained during the protests.

Evan Mawarire, who led a national shutdown in 2016 against Robert Mugabe, has been accused of inciting the unrest. Prosecutors argued against the bail application, saying Mr Mawarire posed a flight risk and could re-offend if released.

Judge Tawanda Chitapi said he would rule on Tuesday but hinted he could ban Mr Mawarire from posting videos similar to the one that the state says encouraged unrest until the trial is over.

President Mnangagwa’s office did not respond to requests to comment.